Company, that has created this player, has appeared under it’s own brand only recently and has long been OEM manufacturer. This means they have needed experience. Let us see how it has helped them to create a budget Tempotec V1-A player.

The first variant of this gadget has been released under V1 name and has been transport only, that means it’s only a digital source without any analogue outputs. This one, V1-A, has gained this capability and has kept everything people like V1 for — compact size, good build quality, two microSD card slots, above average screen and very adequate HiBy firmware. Audio part is the responsibility of AKM4377 that is well known by those who are interested in budget audio segment. 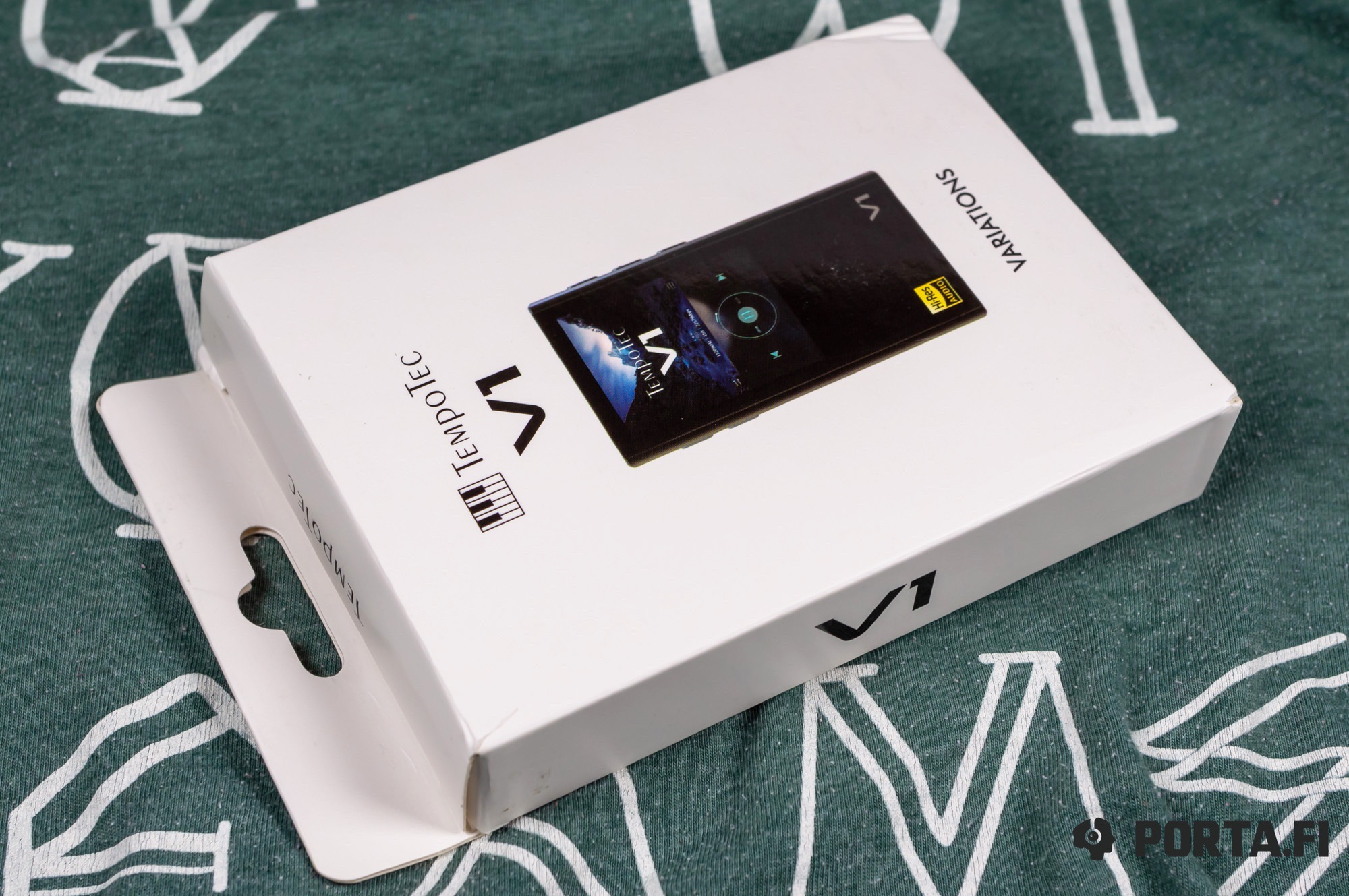 This time here is almost nothing to speak about, Tempotec is shipped in a simple cardboard box with only two USB cables included — regular for computer and charging and shorter USB-C — MicroUSB to connect the device to external DACs.

I would of course like to see at least silicone case but it seems like Tempotec have tried to make the product as cheap as possible, and this is the reason we have got additional cable instead of case. To my extent, this is good. Separately — many thanks to the company for application of protective film out-of-the-box. 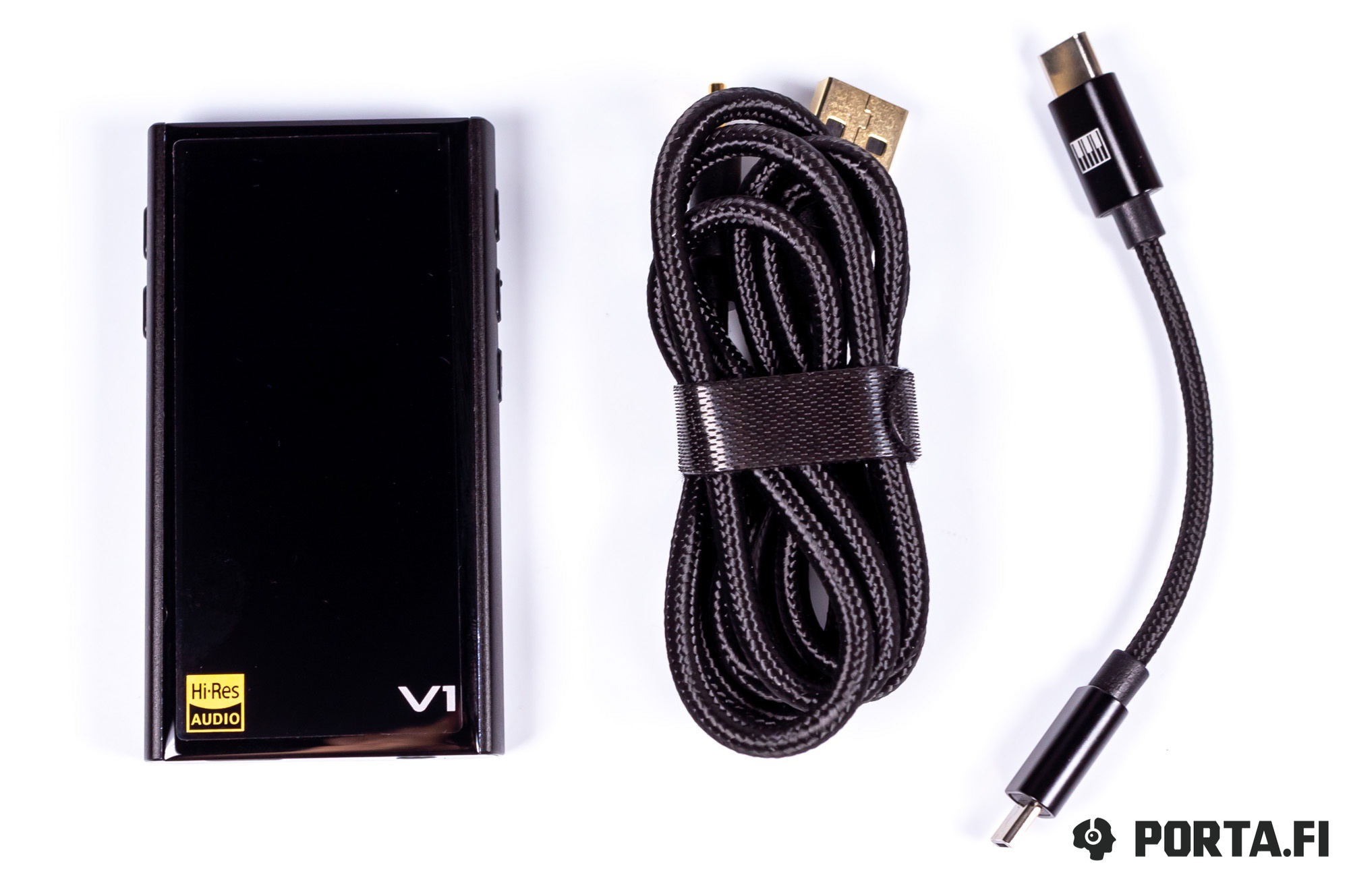 This is where Tempotec have succeeded. There are no innovations or revelations, but V1-A looks much more expensive than it costs. And it’s really small. Of course, it’s not obvious compared to FiiO M5, but it is compared to FiiO M6. V1-A is an ultra-compact player.

The body is made of metal, and as Henry Ford has wanted, it is black. Ergonomically it is good, all elements are there and are logically positioned, so it lies in hand well and has good controls.

There are two microSD clots on the left (rejoice, those who have big libraries), as well as volume control buttons. On the top there are on/off button and LED indicator. On the right — three separate playback control buttons. It’s good to see them in such a budget device, while even some bigger sometimes don’t have them. Buttons register presses well. On the bottom there is a phone out (can be also line out) and USB-C socket that is very versatile. Apart from charging and access to microSD slots, this jack allows to connect external DAC to USB (output to DSD is supported) or coax (adapter required) and to use V1-A as a DAC. There is also support for USB OTG. The playback time is from 11 to 15 hours on a single charge and the device can be charged for 2 hrs 20 minutes. The sleep is not very good here so you should better turn it off when not in use. It’s not a problem, since it’s very quick to turn on and boot. 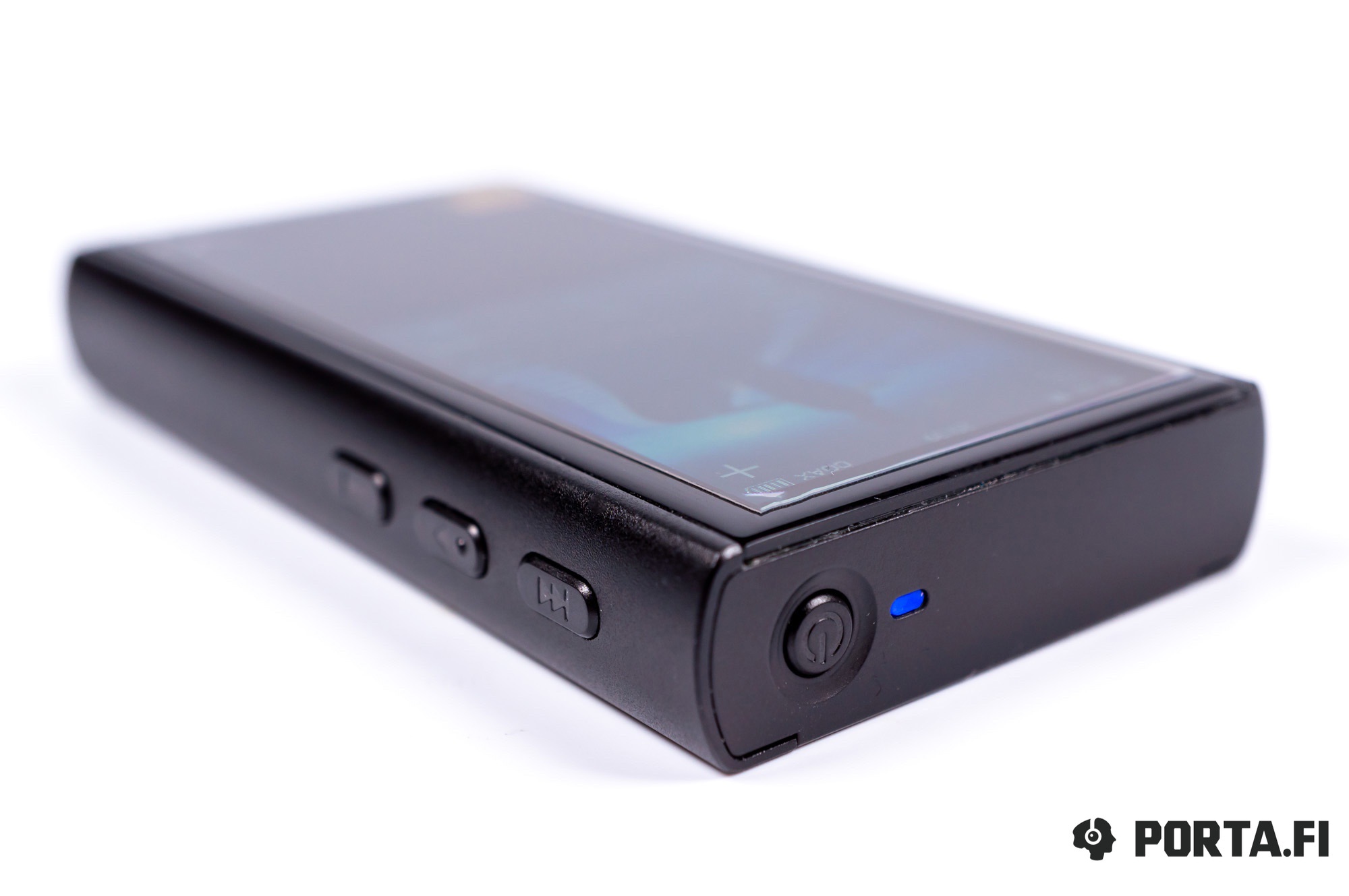 There is a capacitive sensor screen on the front panel and it occupies slightly more than half of it. I’d like the price to be 20-30 USD more and to see screen that occupies all the panel, but probably the display price would be too much. Anyway, display is not bad at all, of course it’s far from being striking as modern SuperAMOLED screens but for player for 100 USD the resolution is more than good, as well as viewing angles and brightness, enough to use it on a sunny summer day.

Build quality is high, nothing that screams budget and it is compared to more expensive devices.

Another reasonable step is licensing of HiBy firmware. We get time-tested HiBy OS, including brand features, such as MSEB.

In general the basic screen layout reminds of xDuoo. If the track is being played, there will be a small panel with cover and composition name. If you tap on it, it will bring on a playback screen with menu occupying the rest of it. If the track is not playing, the menu occupies the whole screen. 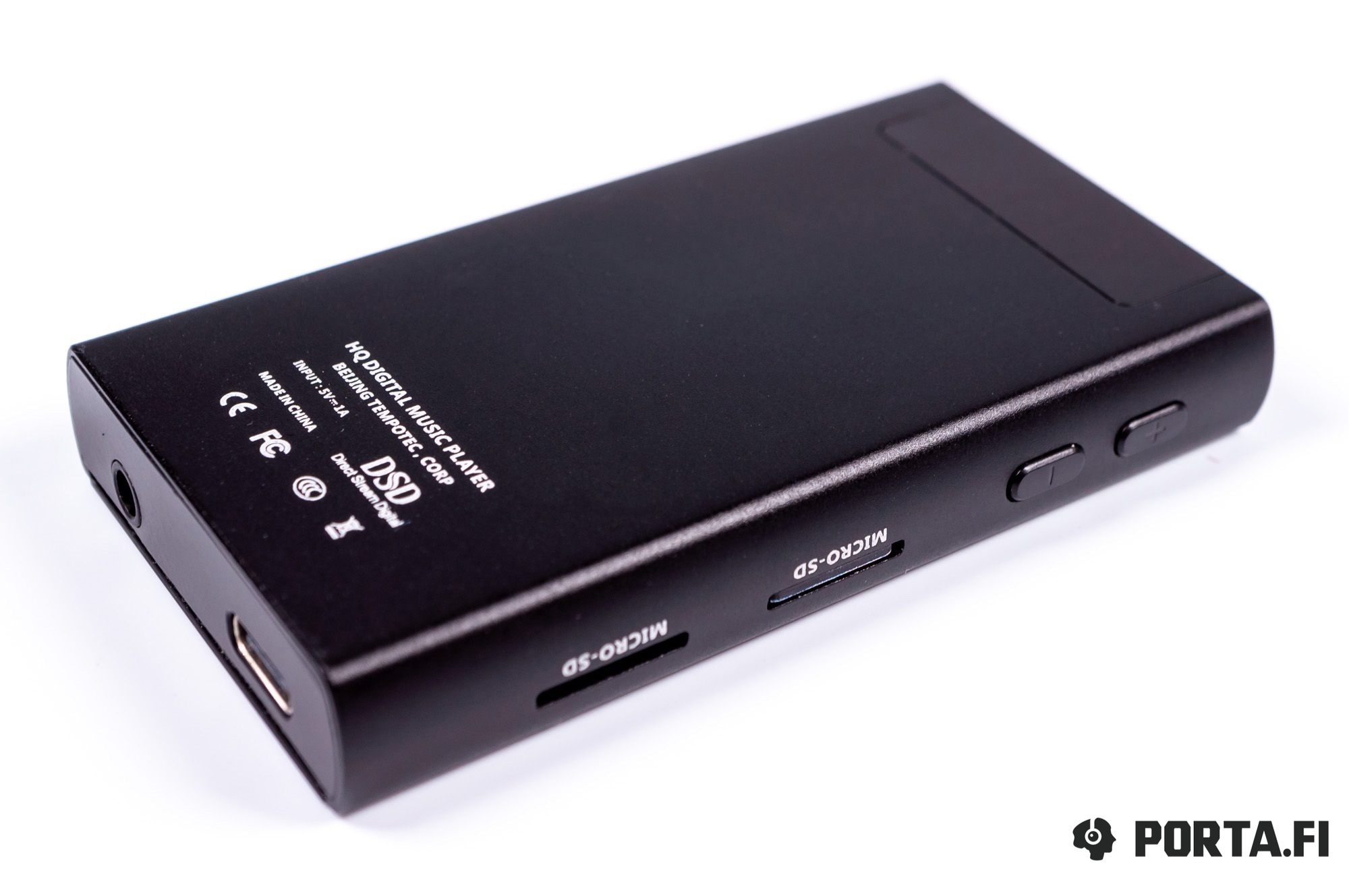 All player functions are logically grouped in menu.

Browse Here is the file browser that allows to see your media library the way you have organized it. There are also batch functions that allow to add multiple items to playlists, favorites and to delete them.

Category Media library organized by tags per Artists, Albums and Genres. There are also playlists, favorites and capability to watch all tracks.

Bluetooth Everything is predictable — turning Bluetooth on and off, connection of devices, choice of codec. HiBy Link is also here, allowing to control the player remotely from smartphone.

MSEB Interesting HiBy development for those who love to fine-tune sound. Compared to regular equalizer it allows to change some obvious parameters, such as “high length”, “springy lows” etc. You can get the same result from an equalizer, but this altered approach allows to do it in a more intuitive way.

Equalizer Everything is obvious here, 10-band equalizer, all presets are present.

Play Settings Playback settings, beginning from volume level and remembering of current track and position and ending with playback order. There is also gapless capability, play through folders and Replay Gain.

Settings Usual system settings that contain everything that hasn’t made it to the previokus menu entry, beginning from language and ending with sleep/power off timers.

About As expected, here we get main player information, its firmware, free memory and so on.

The screen supports swipes — swipe from the left brings you back, swipe from the bottom gets you to quick settings menu where you can quickly change gain, brightness, volume and so on. 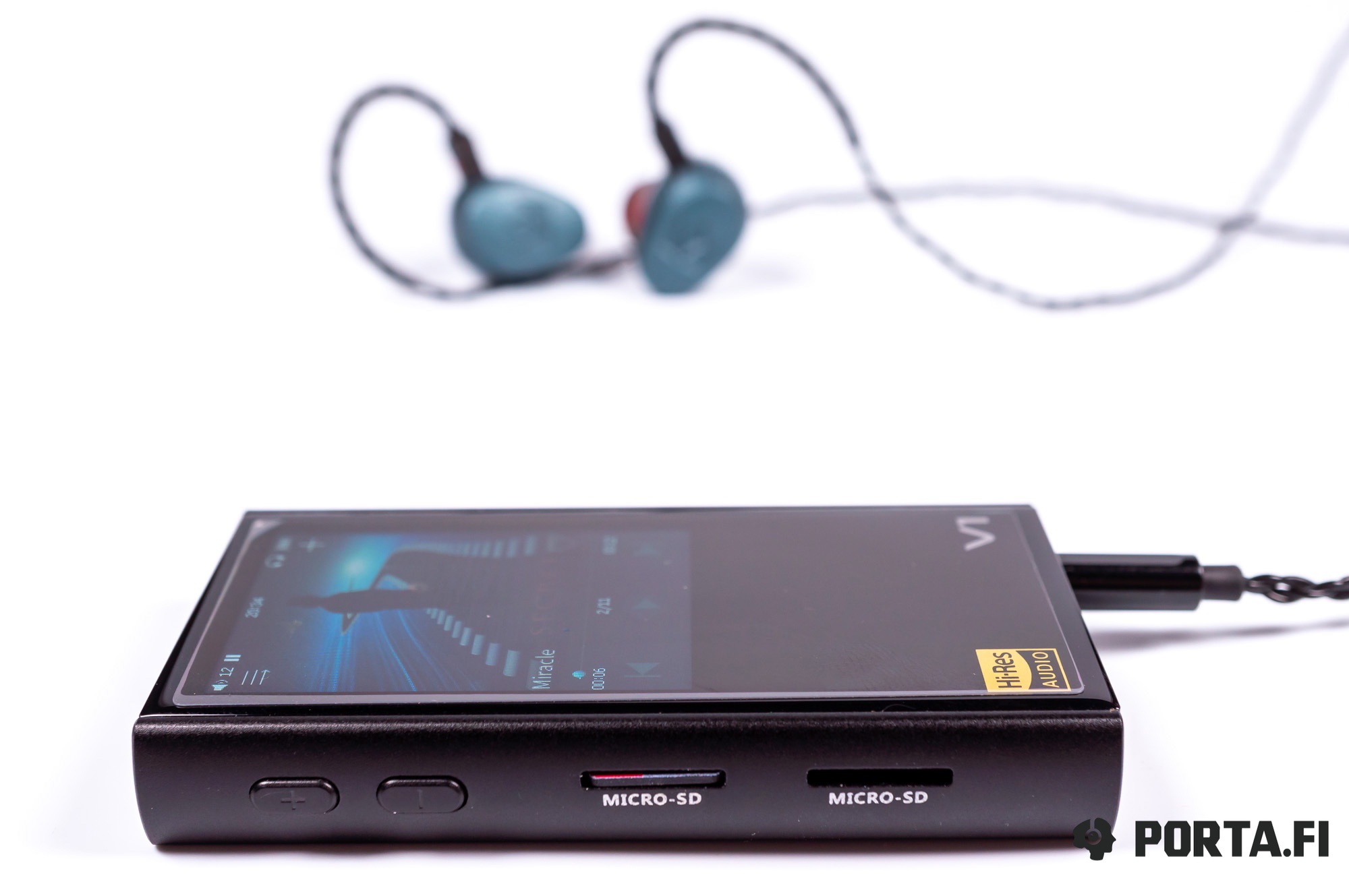 Upon the whole, the firmware is rather stable and experience of HiBy is clearly seen. There should be not much of additional functions in future, if any, but in current state the firmware is very good functionally.

Unfortunately there are no revelations in sound. Even rather budget all-in-one solution from AK that can be cooked differently, has remained not used to its full potential by Tempotec. In general sound is okay, but many have wanted some breakthrough in terms of sound, if not segment leadership. 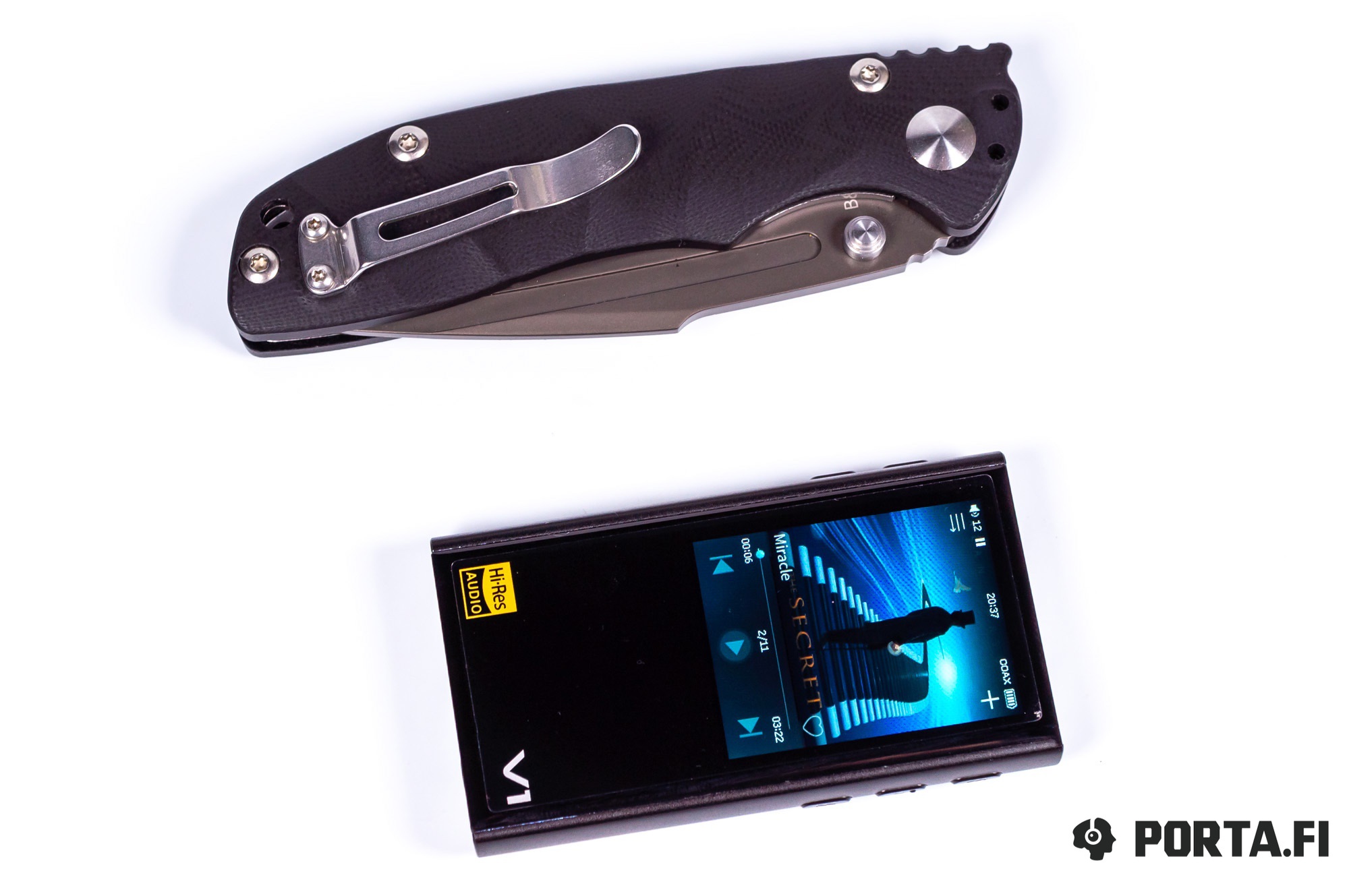 Bass gets much attention from the very beginning, it is accentuated by additional weight (not quantity) and this brings some warmness to the overall sound. Resolution is normal, not ideal, but good for this segment, attacks and decays are a little slowed down, but bass is well shaped still. The depth is not bad, thought not maximal. Textures are average, but again, this is a budget device. What is important — lows are very well controlled and do not go to the mids.

The mids are not bad in terms of resolution, they lack micro details to sound more saturated and full, but in general they are good in macro details. The player has enough quality to transmit what is there in recording but at the same time is quite tolerant to the quality of material. The soundstage is average in terms of width and below average in depth, but layering is good. This is one of the main differences of V1-A from generic smartphone, since the latter has almost zero depth.

The highs are where compromises begin. They are diminished in terms of quantity to create comfortable and warm sound, but it’s not bad, many of you will like such presentation. The problem is in oversimplicity and lack of length. Highs are of course comfortable and have some resolution but attacks and decays are far from being realistic. Sometimes they sound congested. To some extent it can be compensated by headphones, but not for all styles and genres will require it. 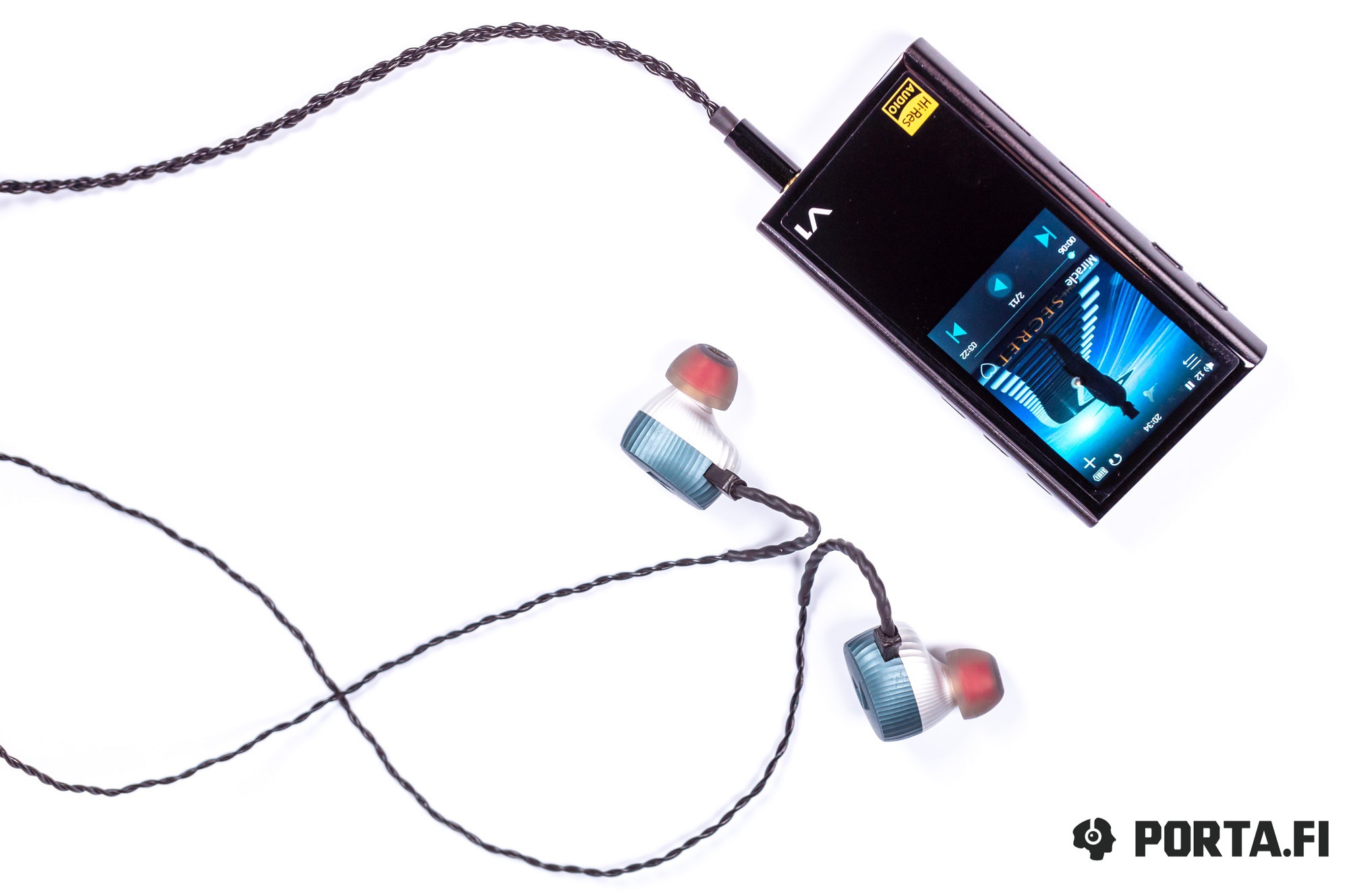 As you can see by its power, the player is designed for IEMs and most sensitive over ears and will not be enough for anything else. The background noise is not very audible, I even don’t know why there is gain switch. 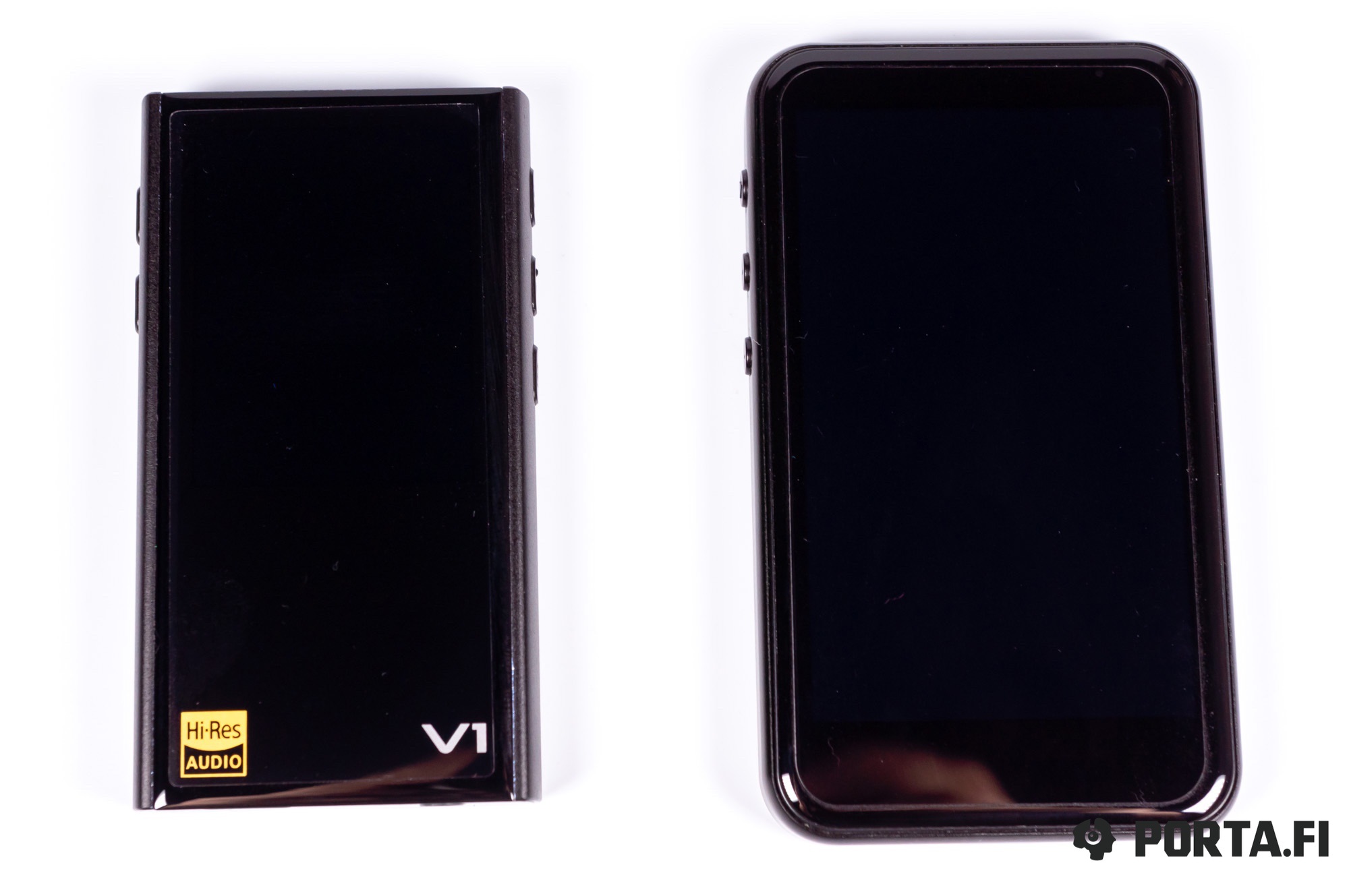 Speaking about genres, player feels better in cases when ideal highs are not important, but it is not a good choice for genres that require realistic approach, and still they can be listened to because of not bad mids. The sensitivity to the quality is moderate — 6 out of 10.

Tord Gustavsen Trio — Re-Melt Famous Norwegian pianist is well known to all who love jazz as head of trio, quartet and ensemble by his own name. The track is played by V1-A well, with clear mids and meaty bass that allow good presence despite simplified highs.

Sam Watts — 8 1/2 Another jazz-like track, but this time from musician who is bored by single genre. In this track you will hear everything, starting from avant-garde to tango. V1-A plays it not bad, adding some weight and realism to music.

It’s really good device. Of course, if the developers have developed better sound, they would have made a real killer that might overcome even more expensive devices, but this hasn’t happened, so we have a player for those who seek for quality digital transport, Bluetooth source or solution for listening to music on-the-go, comparable to the best smartphones.