Cayin have already proved that the company that has good experience in “big” hi-fi can successfully enter the portable audio market. Their first player — N6 — has entered the niche and moved down many mature players. Four years later we get its successor that has got an expected name — Cayin N6 II.

Cayin have tried different approaches and have found out that the market of portable audio has changed a lot, so they have decided to try an unusual idea. Player with Android causes no surprise, as well as interchangeable amp modules, so Cayin engineers have created the device in which you can change the whole audio internals, not only amplifier, but also the DAC. So, out of the box, Cayin N6 II has AK4497 and OPA1622, but in future it can be changed in a minute.

HiBy specialists have also taken part in the development process and created the firmware for player, so it resembles the variants from Hiby, including hardware internals. Here we get Snapdragon 425, Android Oreo, large sensor screen — everything we can find in R6.

Of course the price has gone up, and as of writing the review N6 II can be purchased for approximately $1200, but it can change due to customs charges and taxes. 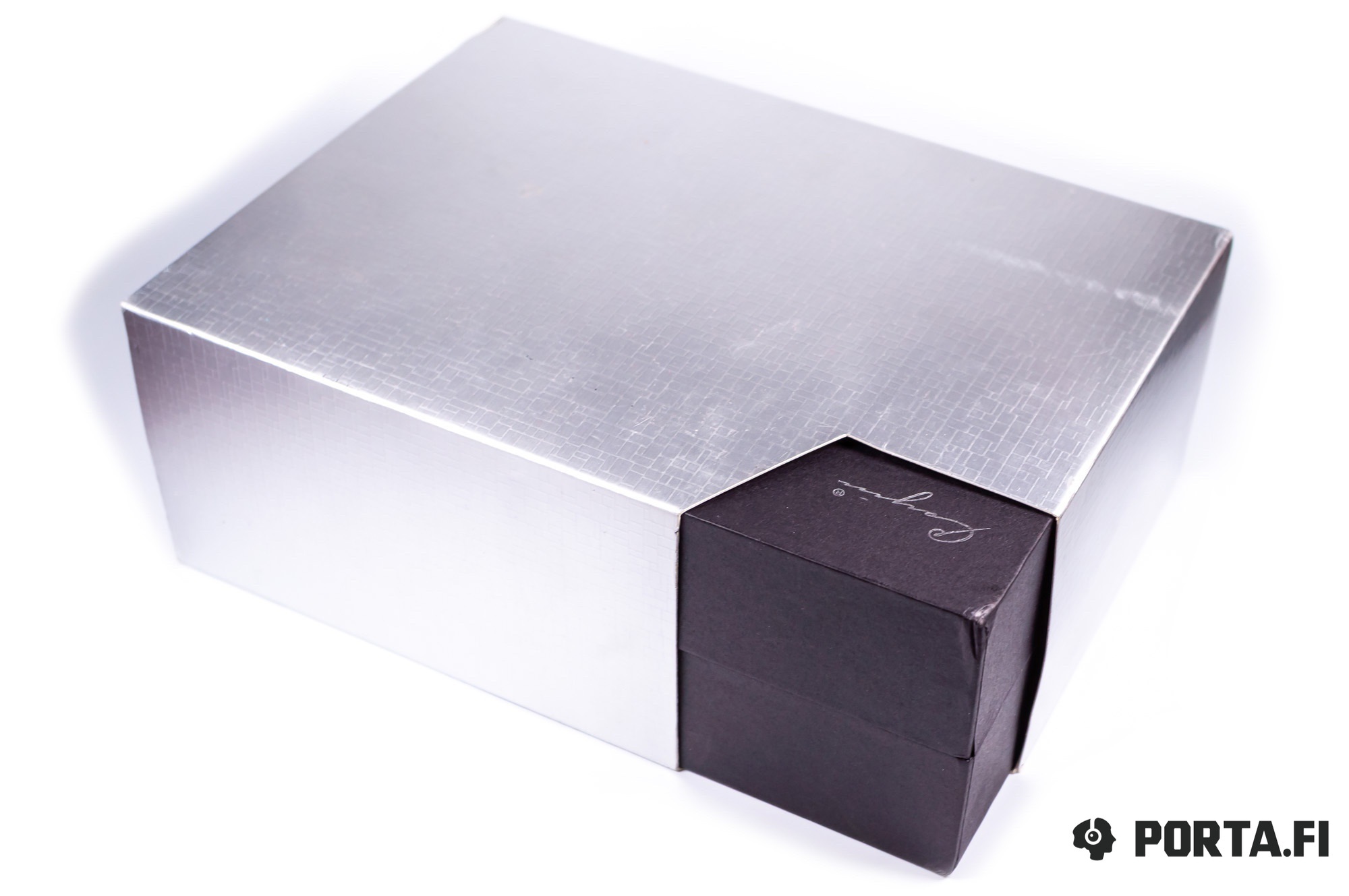 It is no chest as in N8, but still Cayin designers follow the rule — good packaging, big packaging and the shinier — the better. The newcomer comes in a rather large black cardboard box with silver dust cover. The packaging comes apart in the middle with player on one side and accessories in the other:

Of course the accessories variety is not on par with N8 flagship, but luckily Cayin is not greedy and there is everything necessary. 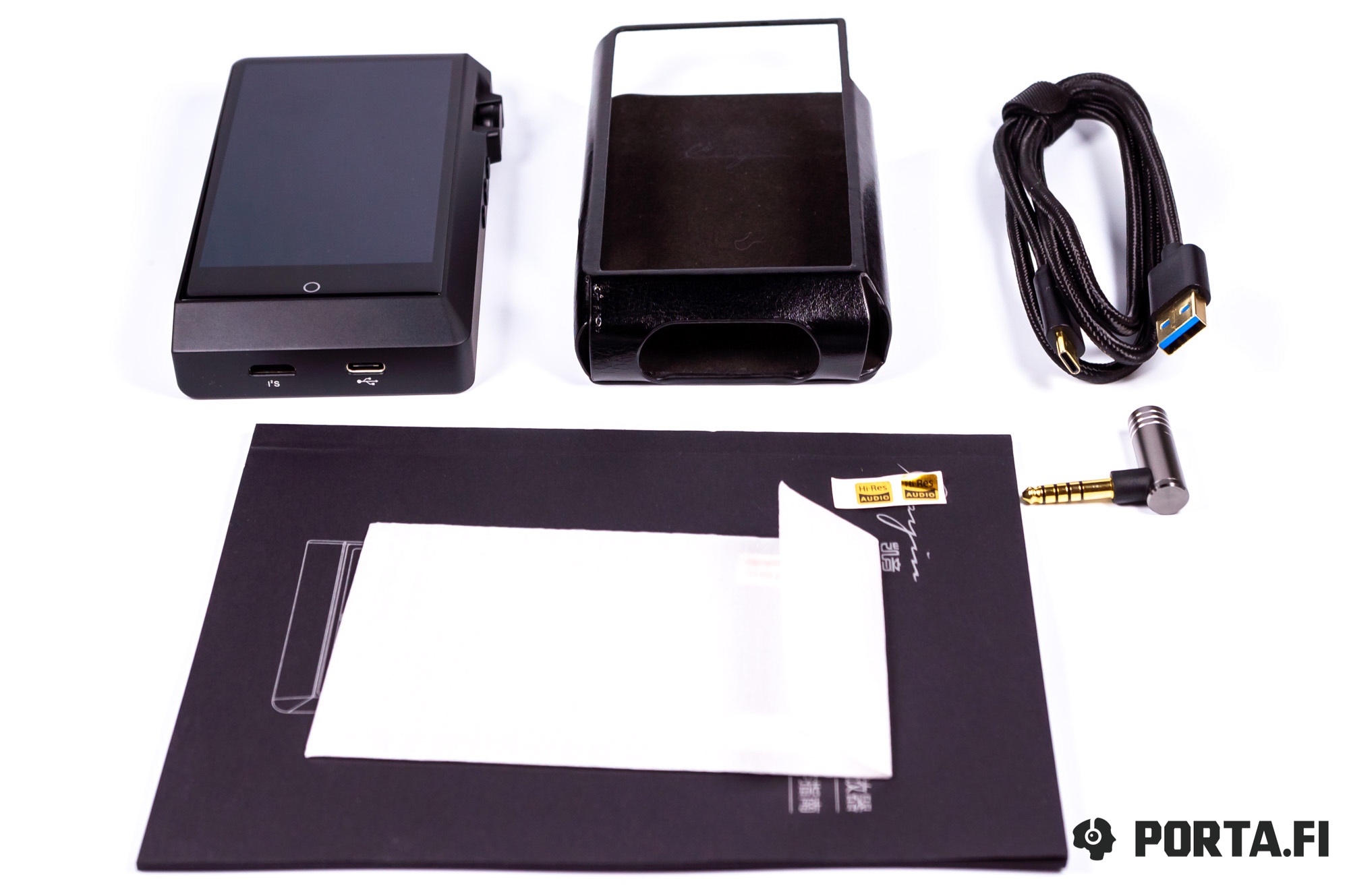 I am still missing the past approach of Cayin designers from “big audio”, since every new model became closer to portable world. Luckily, the designers have stopped in a right place and the new player is not a brick. Using unique shape, designers have created N8, and N6 II somewhat resembles it, except for some new ideas.

The body is made of black aluminum, it is rather big and massive. In fact it is on the verge of being portable. The sides are angled and this helps it look not bulky and visually diminish the size of the front panel. 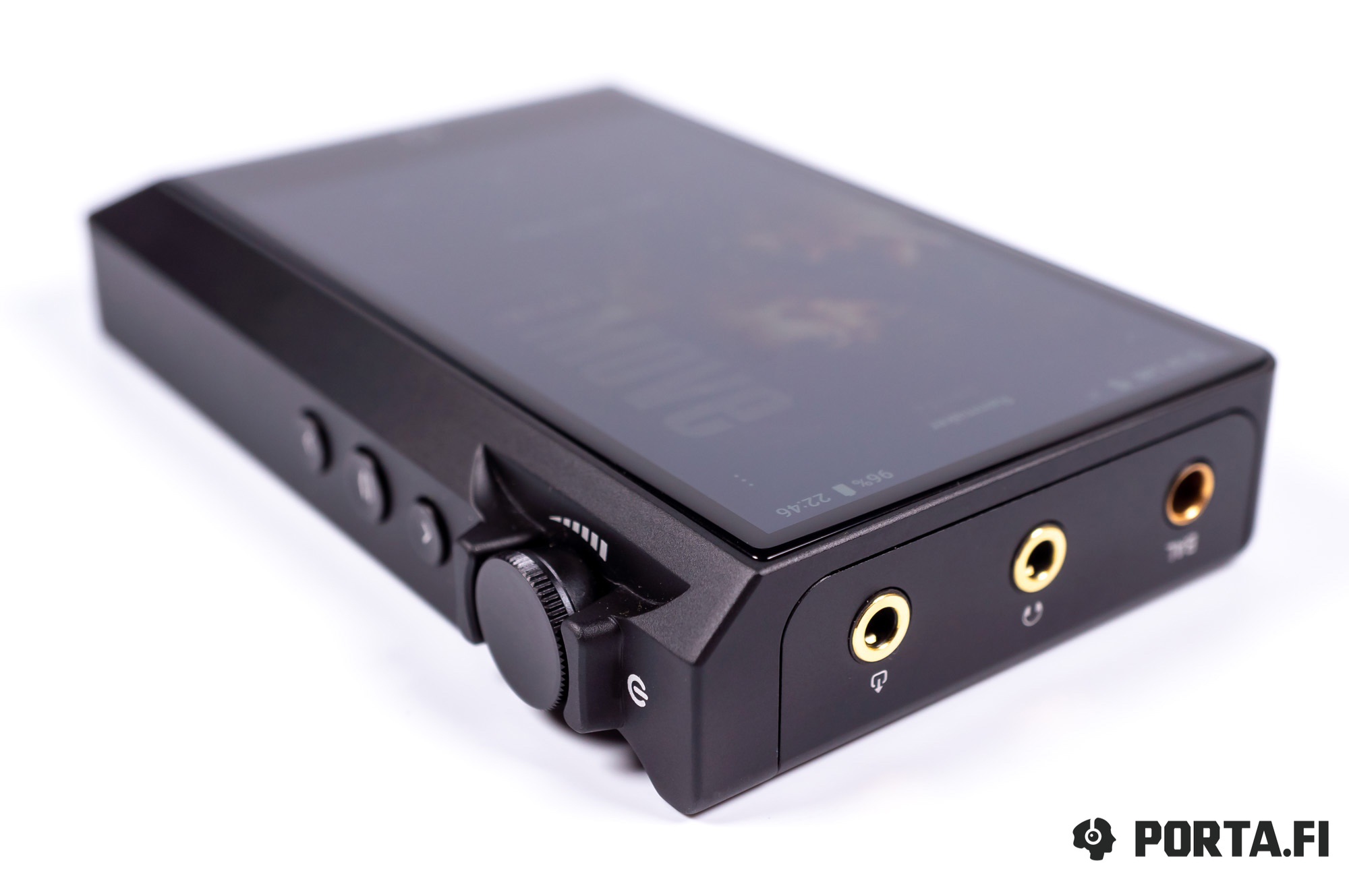 All sides of player contain most of player hardware interfaces, and the positioning is rather usual. There are three playback control buttons at the right side, as well as volume wheel (combined with power button). The encoder is of good quality so it turns just right, with correct clicks. On the left side there is a memory card slot. Player also has internal memory, but more space is always welcome. On the bottom side there are two outputs — traditional USB-C and I2S that uses Mini-HDMI. The latter will be very convenient for those who possess desktop Cayin DACs. The USB jack is not simple and apart from standard functions such as charging and access to internal memory it is used to connect USB OTG disks, use the player as portable DAC and to forward the digital signal through USB Audio or S/PDIF.

Cayin’s love for big batteries is very welcome. The player can really hold the charge for 14 hours of playback if you use not too demanding headphones single-ended. The charging time from 10 to 90 per cent takes approximately 115 minutes. 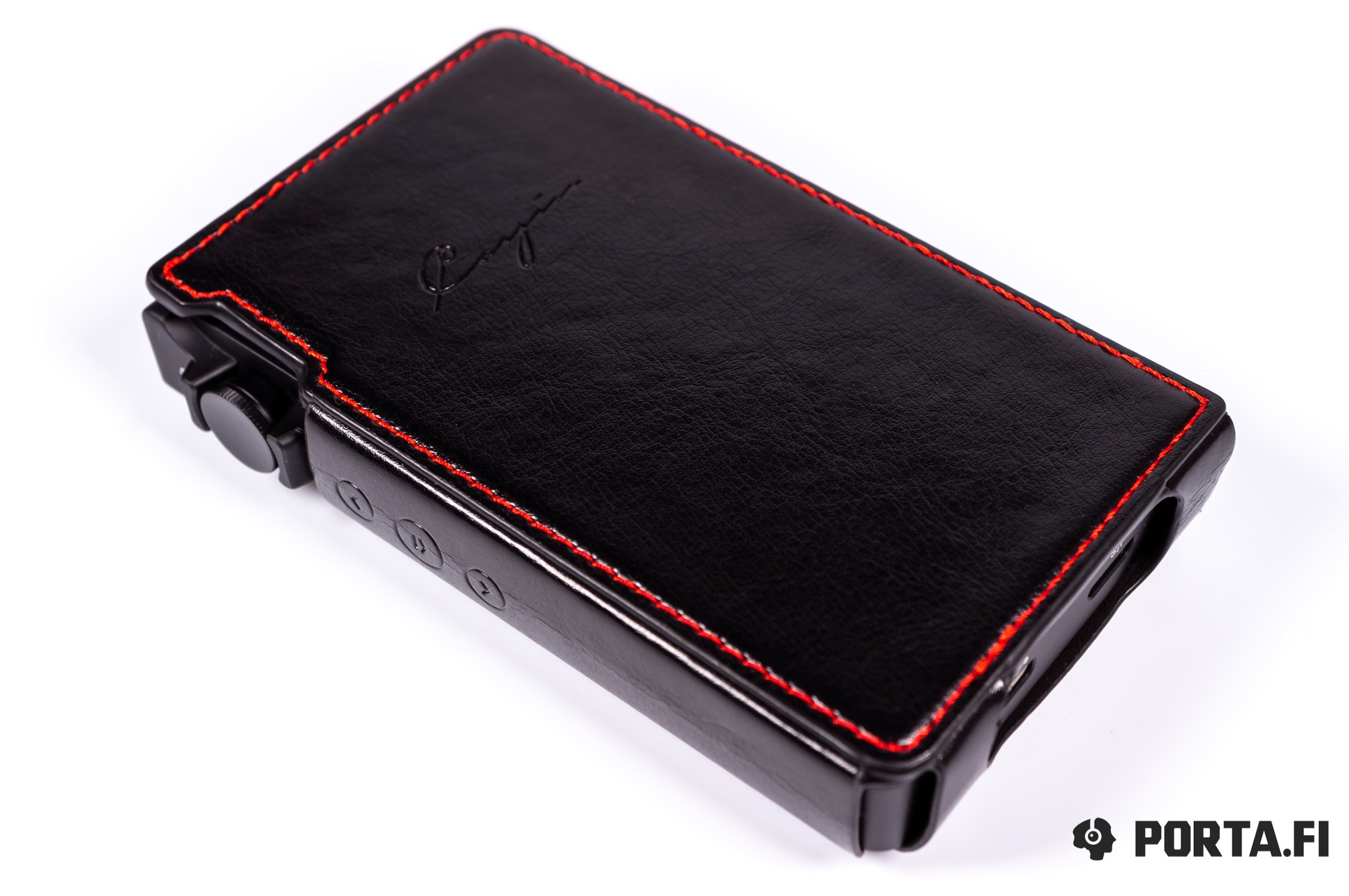 The upper part is almost all dedicated to the interchangeable audio module with its connections. In stock variant it is regular headphone output and lineout with 3,5 mm interfaces and balanced Pentaconn connection. It’s likely that other modules will offer different interfaces. In order to change the module, you will need to unscrew couple of screws on the back part of the player.

The front panel is dedicated to the screen with good matrix and viewing angles, normal resolution and enough brightness to be visible outside on a sunny day. However due to the body construction the screen doesn’t look as striking as with the players that have edge-to-edge screen. At least, Cayin have put a capacitive sensor “back” button that makes navigation easier.

The overall build quality is very good, everything is logical, of correct size and without faults. The player looks monolythic, it is comfortable to use. 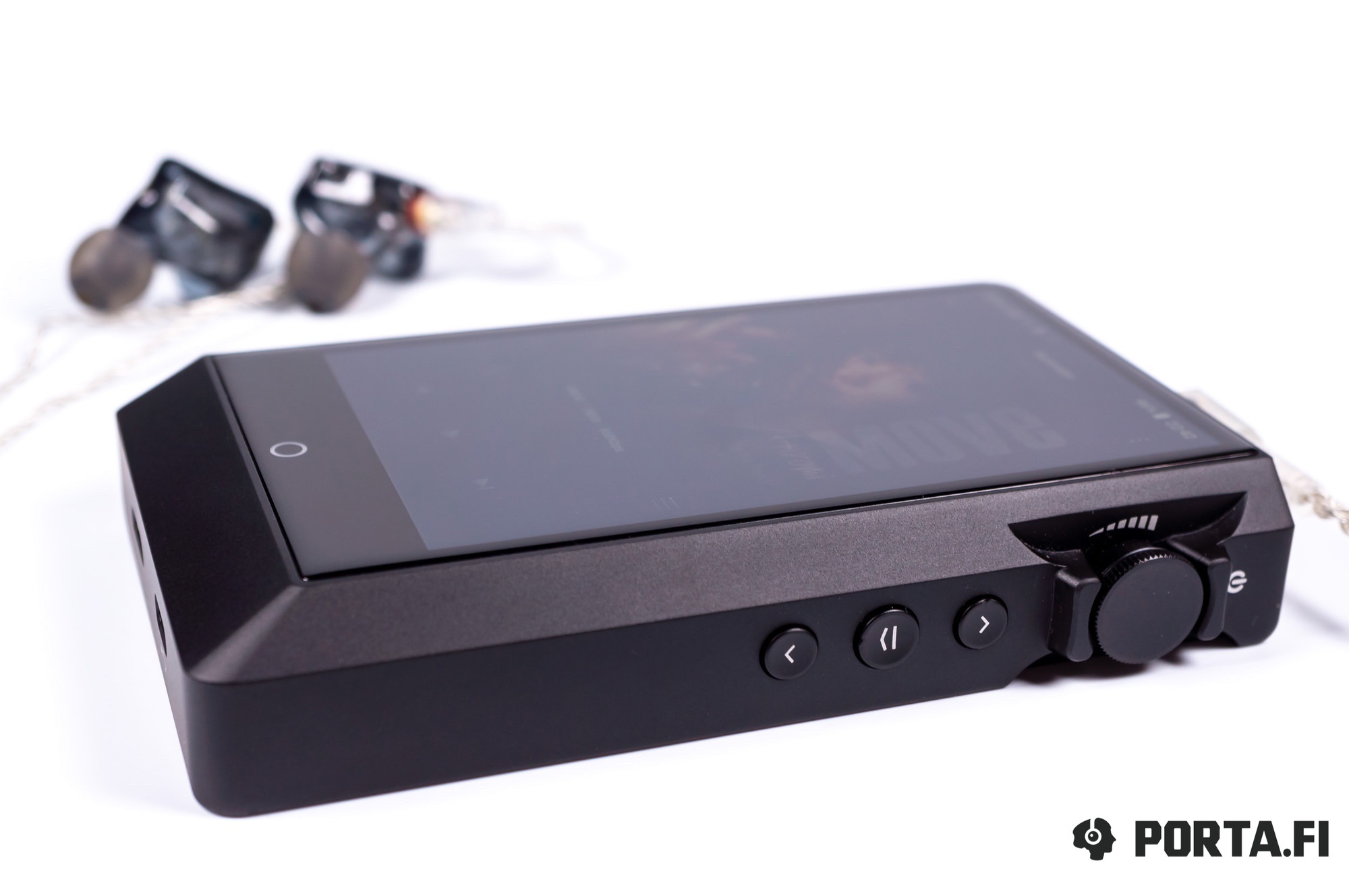 To tell the truth, I don’t think the firmware is worth speaking much about, since it is almost pure Android 8 with brand DTA technology that allows all programs to output sound to DAC without resampling. There are some minor changes, connected with sound (filters, gain etc) in tray and preferences. Google Play presence is a good bonus, so that you can easily install UAPP and preferable streaming services.

Interesting that player has two software players — from HiBy and… from HiBy again, however it is called Cayin Music. There are no major changes between them, they seem to share the same code base, approach to library organization and sound. Cayin Music offeres several themes for playback screen, as in the case with Cayin N5 II. There is a really appealing variant with linear progress indicator. HiBy variant has more preferences and MSEB support — the enhancer that HiBy fans consider to be the major company achievement.

I will not discuss those player in details — everybody can install HiBy music for Android or iOS and test the app. 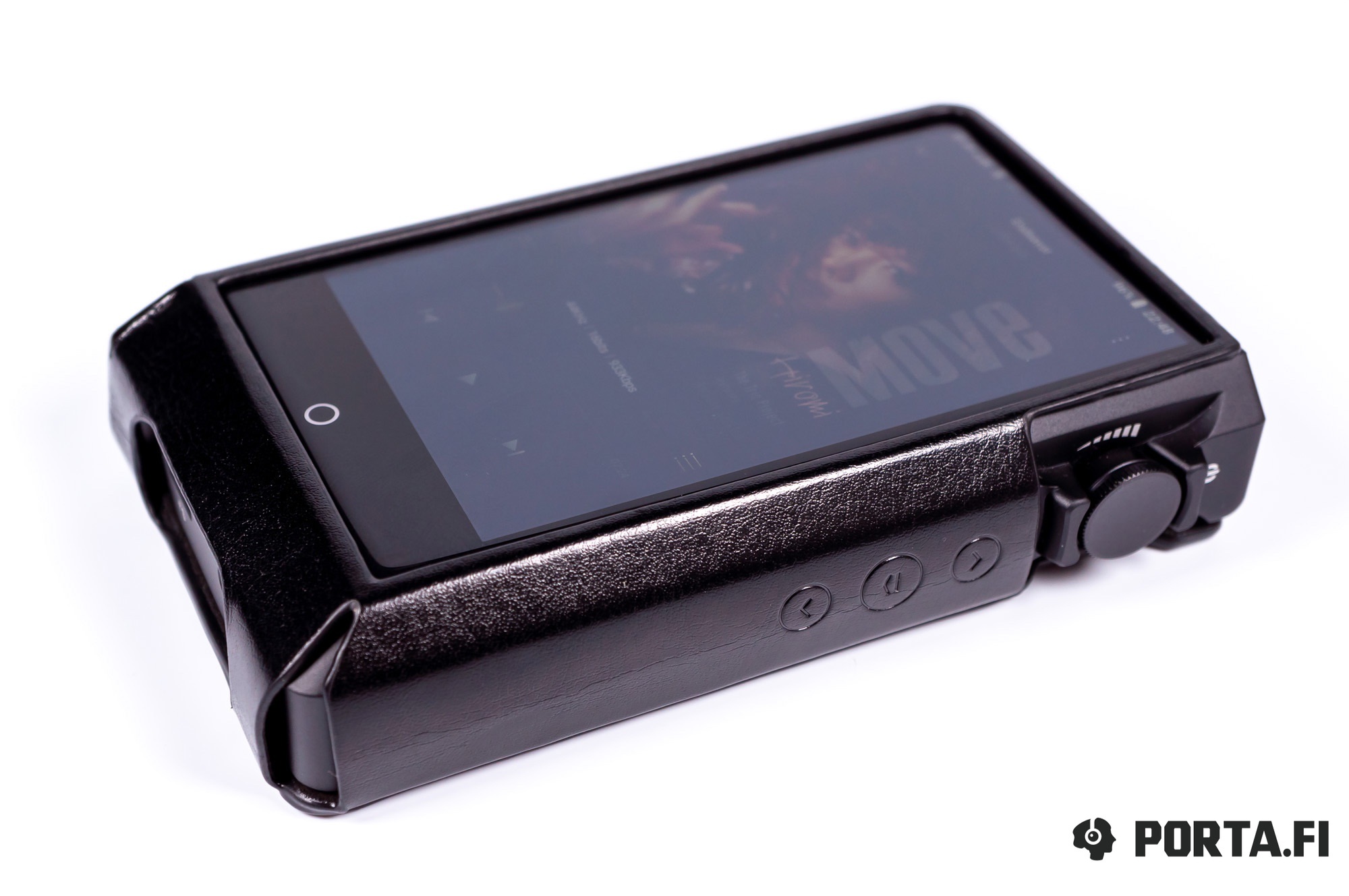 The firmware is stable and rather quick, the developers have made the codebase stable long ago and build advanced software on it that is good functionally and included Replay Gain, HiBy Link and many more. The hardware is rather quick and it also adds positive emotions.

Cayin have found their own presentation. Instead of maximal resolution and micro details they try to bring emotions, drive and energy, not forgetting about technical parameters. 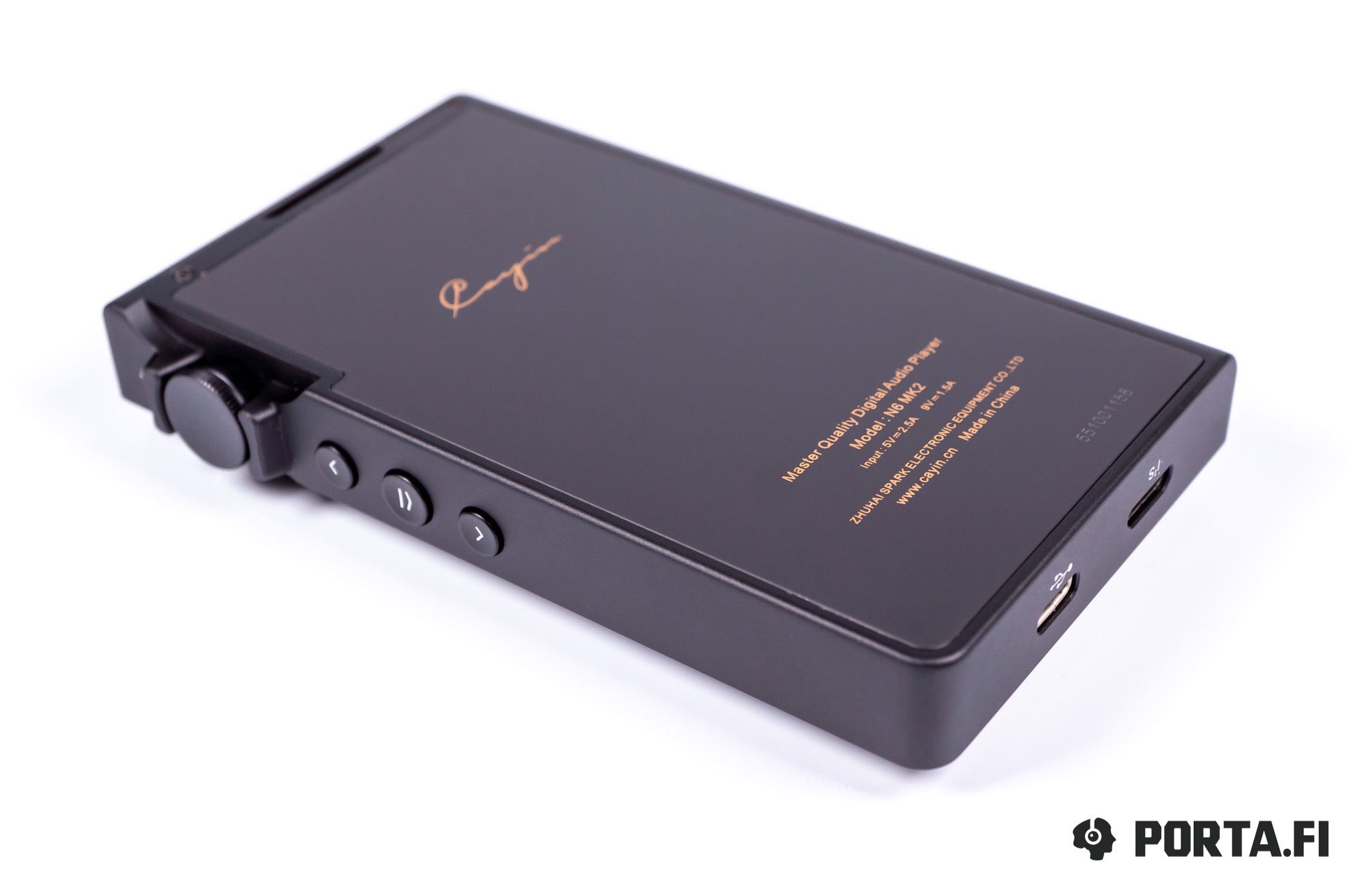 The lows are slightly accentuated but not with the change of frequency response, but with additional energy and thickness that player brings to this part of range. This brings massiveness and more slam that is usual for company players. Of course this accent is slight and does not draw excessive attention, but serves as an additional attraction in overall N6 II tonality. The bass has great depth and control, the resolution is close to maximal and textures are good as well. The lows reveal natural instruments in an outstanding way, but those who love synthesized bass will not be disappointed as well.

Mids are very musical, the player enhances emotions and gives additional weight to the instruments of this frequency range. The resolution is good, but since it does not accentuate micro details, you won’t find small nuances and the presentation is more whole. Due to this fact the player is not very sensitive to bad recordings or problems and keeps instruments and vocals appealing by sacrificing neutrality sometimes. The soundstage is not flagship but is clearly above average in depth and width with quality instrument positioning.

The highs are also in the style of the player. They are more comfortable with smoothed attacks. Even on tracks with sibilants the player tries to present music in the way that will not irritate the listener. Of course do not expect the device to turn your Dunu DN-2000J to Shozy Zero, since the main influence on sound is brought by headphones. Generally speaking the highs are good here, they have enough resolution, natural decays and good balance. Layering is above basic level. It will appeal to those who love naturalness and overtones. 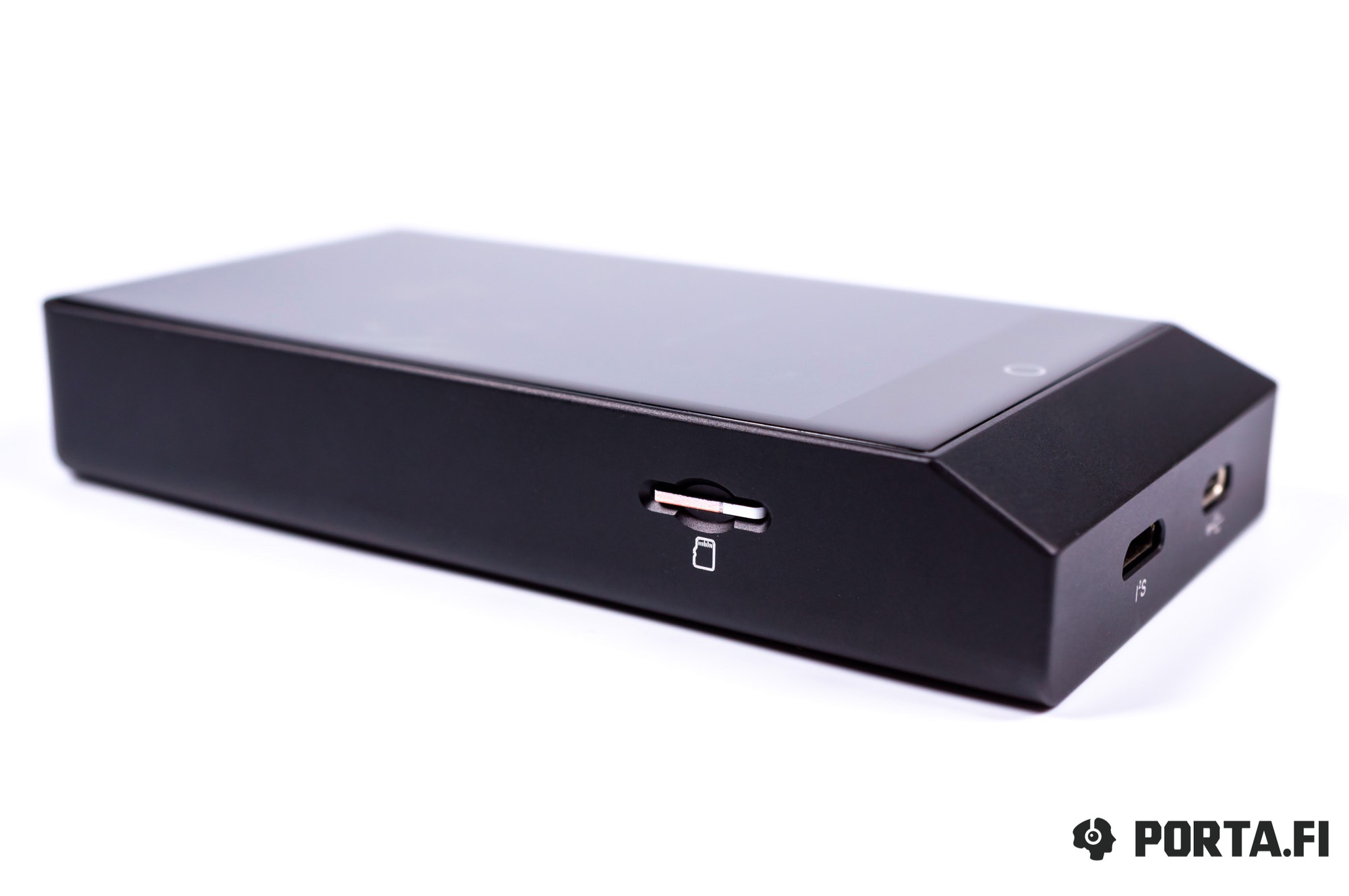 Traditionally I will concentrate on sound and will not cover such thins as price and usability.

Cayin N6 In comparison to the first revision the newcomer sounds more massive and emotional. It is good, since N6 sometimes lacked weight and sounded more monitor-like.

Cayin N8 N6 II somewhat resembles the presentation of N8 and even blindly we can say that they have been tuned by the same people with the same goals. Of course, N8 is more detailed, has better attacks on highs and better length in this frequency range, which brings us this more mature presentation. Additionally, N8 has a tube mode with quite different presentation. However, it’s possible for Cayin to release tube module for N6 II.

iBasso DX220 Seems like direct competitor. iBasso player is more neutral, has slightly more details but less accentuated emotions. It presents vocal and instruments without that additional weight. This is a real battle of monitor vs. fun approach. 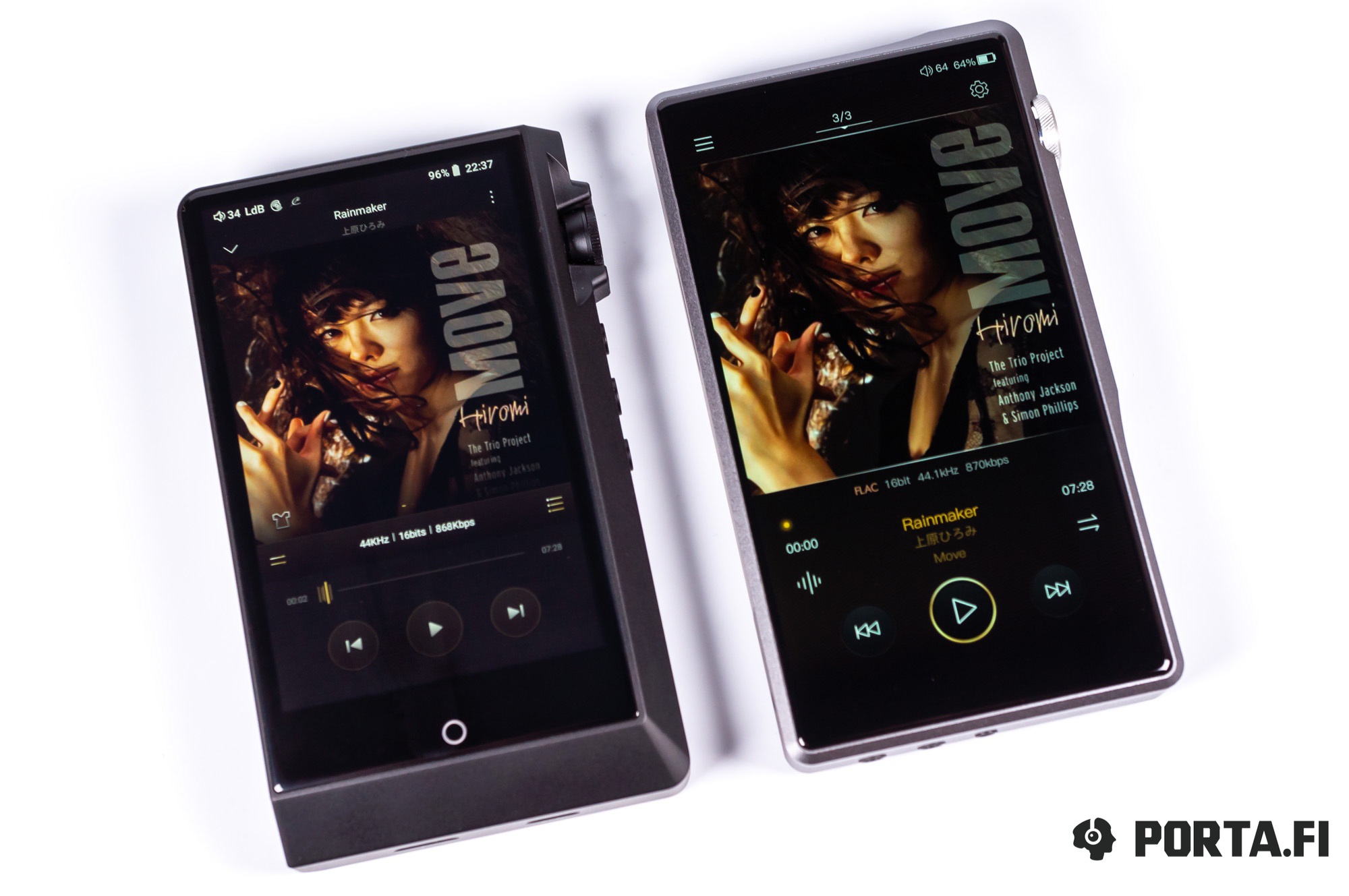 Questyle QP2R Another emotional player, however more conservative. It is more detailed in mids and less thick in lows.

Quloos QLS361 The player from the opposite side that is maximally neutral, transparent and not bringing anything additional to the music.

HiBy R6 Pro Here we have another situation. HiBy plays music more wholly and massively and has less resolution. 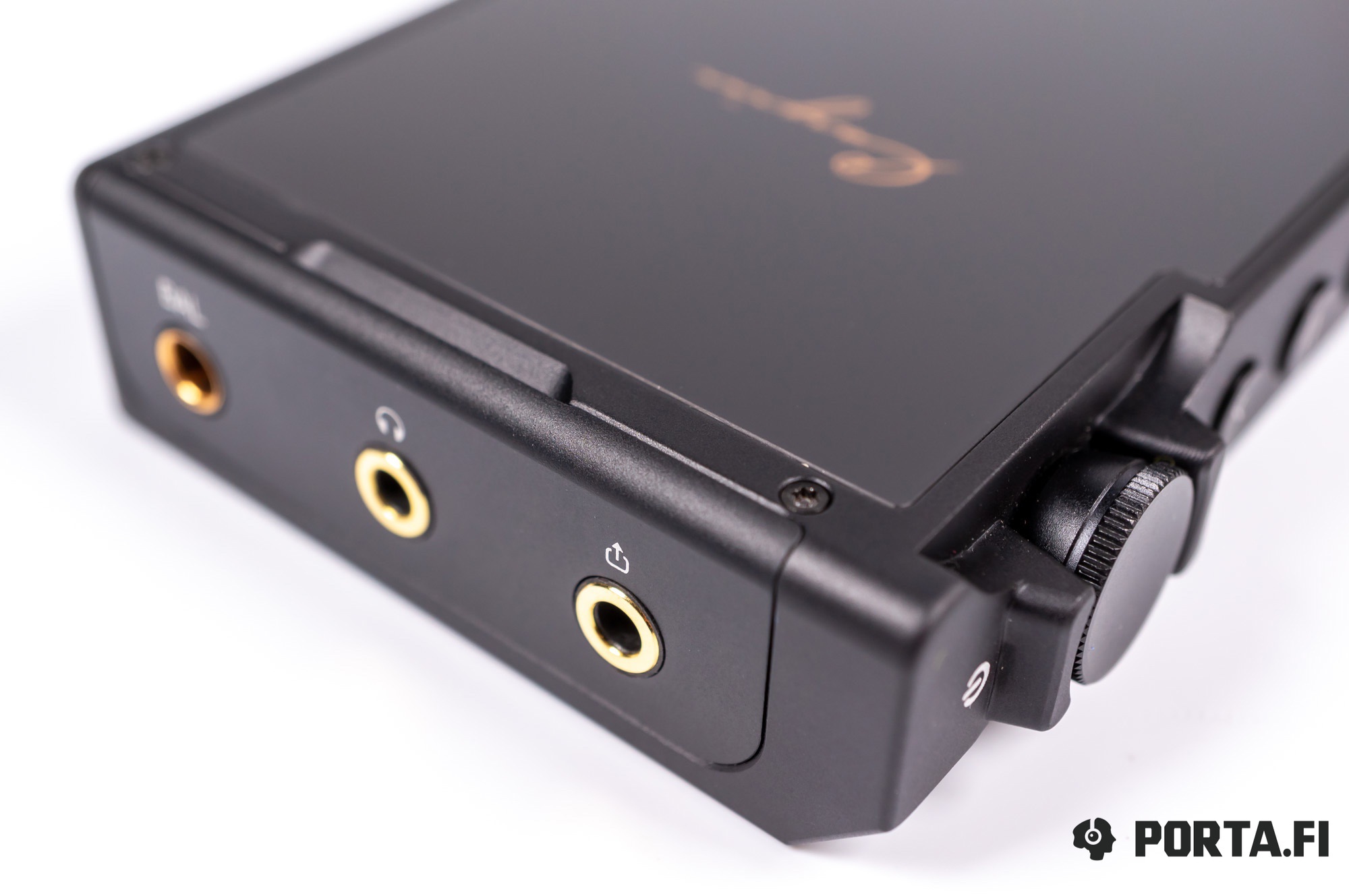 The stock module is not as powerful as with Cayin N8, but still N6 II is in the upper league, especially when used balanced. It won’t have any problems with most of headphones that can be used with portable players. The background noise is very moderate even with high-sensitive variants. There are three gain levels, and this helps to reach overall flexibility.

In terms of style N6 II is globally universal, but is slightly better with genres that require drive and emotions, from classic rock to vocal jazz. The sensitivity to the recording quality is above average — 7 out of 10. 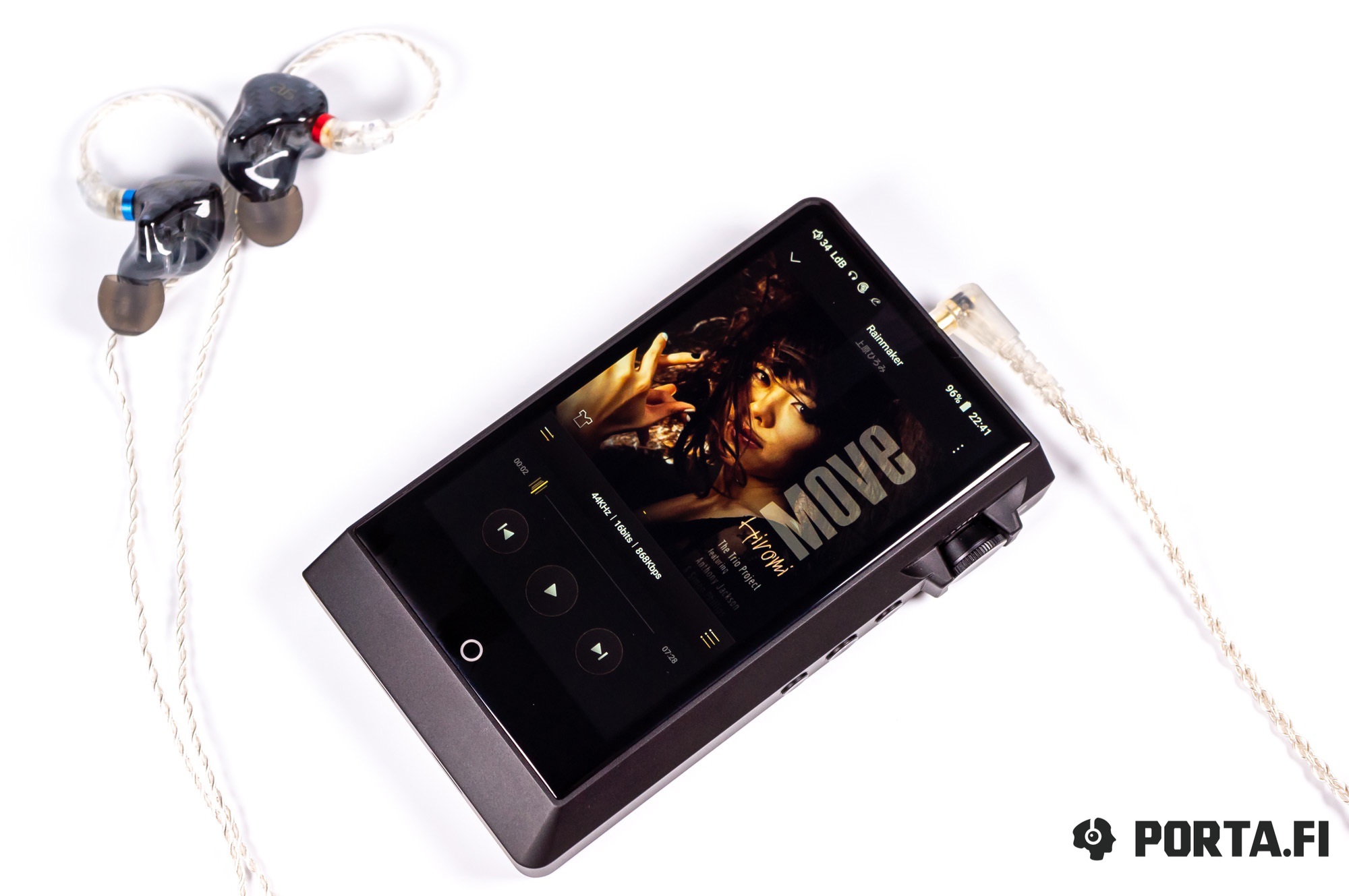 Jordan Rudess — Drop Twist The beginning of this track sounds rather simple, but it passes quickly — remember that we have Rudess here. The composition follows with complex passages and Dream Theater-like expression that is well underlined by N6 II.

New Masters — Lucid Dreams The masters of modern jazz that are gathered together by The Jazz Gallery have decided to play a game with you. The track begins with a very familiar melody that appears and disappears in this good example of contemporary jazz. This post-modernist version of imitation game becomes successful with emotional presentation of today’s player on review.

Coheed and Cambria — The Gutter (Acoustic) Here it is — a real pleasure for ears of portable audiophile — the acoustic track from progressive geniuses recorded in a way to demonstrate the abilities of beloved headphones and players. The new Cayin player shows itself from a good side and brings emotions, thickness and details in correct proportions.

Cayin have not only succeeded in creating an interesting player with interchangeable sound modules, but also the device that follows their ideology well and brings emotions, drive and expression. Let us wait and see the sound of additional modules when they are released.