Hidizs obviously enjoyed the idea of Kickstart platform preorders for their new projects. After a successful campaign for their Hidizs AP80 player, they decided to try the same approach for their new IEMs and started the crowdfunding for two new models. Today we will take a closer look at the junior model.

I would like to thank Hidizs for providing me with a review sample of MS1 in exchange for my honest and unbiased opinion.

Both IEMs adopted the codename – Mermaid. In fact, they look rather similar both in terms of appearance and packaging. The difference between them is that MS1 are single-driver dynamic IEMs and MS4, that I haven’t got for review, unfortunately, add 3 more Balanced Armature drivers to dynamic. Both models can be pre-ordered in three variants: basic, with single addon of choice or with all add-ons. Among the add-ons are the balanced cable of enhanced quality, Bluetooth cable and USB-C cable with DAC (and it is good if it is the same one used in Hidizs Sonata). 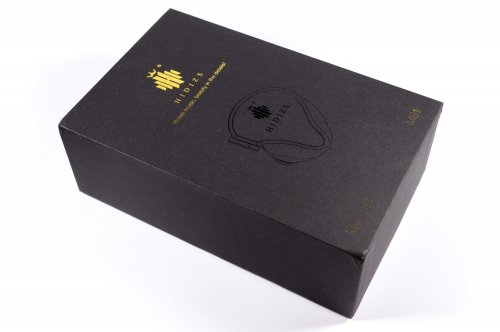 Prices are average on the market currently. The junior model starts from 150 USD (100 USD during the crowdfunding campaign). Senior is planned to be sold for 300 USD, but currently, its price starts from 220 USD.

The IEMs came in the standard Hidizs cardboard box with silver embossing. The contents of the box resemble the flagship FiiO models. According to how the accessories are placed in the box, highly likely that they are made on the same factory. Besides IEMs there is a cable, plastic case and 12 pairs of eartips (3 pairs of 4 types): foam, bassy, balanced, and treble-oriented, that are named “vocal”.

It is likely for the senior model to have a better case (some images on the net suggest artificial leather).
Those enhanced accessories will be present for those who purchase add-ons. 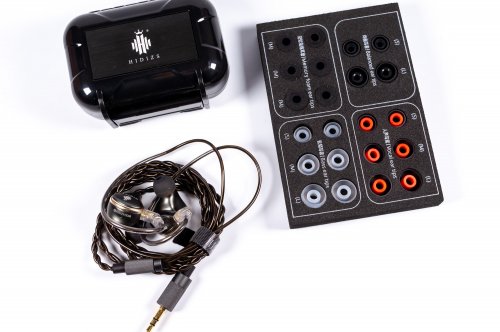 Accessories set is very good for this price.

The appearance of new IEMs dispel doubts about relationships with FH5. The IEMs seem to be similar except faceplates. Bodies are made of quality metal. Shape exploits stylized universal representation of custom IEMs. There are three available colors: dark gray, blue and red. My gray variant sports a great shiny insertion on the outer side of IEMs. Here you can also find the company name and logo.

The shape of IEMs is well thought over and MS1 can easily fit any ear, however, they can still be a little large for too small ears, but it is a rare case. The sound hook has normal length and ensures above-average isolation and comfy usage over long periods of time. 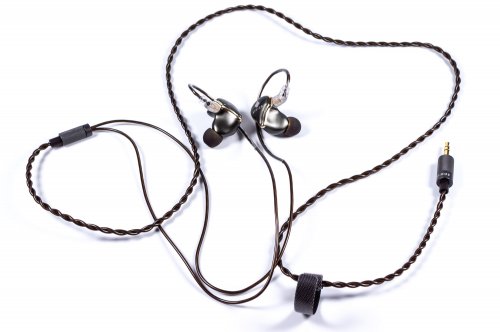 The IEMs are designed to be worn over the ear and it will be almost impossible to wear them “cable down” even if you change the cable itself. The cable is, of course, detachable and Hidizs chose 2-pin connectors, probably because they did not want to crash into MMCX problems). It is rather simple, at least in MS1 model – usual silicone isolation, ear hooks without memory effect, twisted spiral after the Y-split up to the jack. The cable is, however, good in everyday use – it is not too noisy, springy enough not to be prone to entangling and does not stiffen in cold conditions.

General build quality is good, there are no problems or faults here. IEMs look strict and respectable and look very attractive. 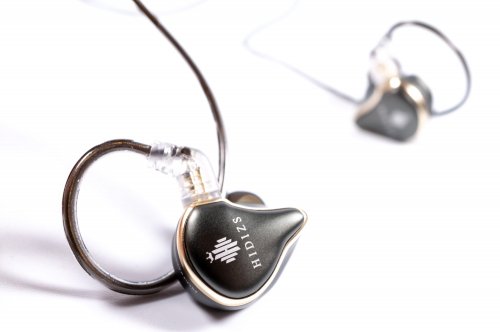 Prior to testing, I allowed 48 hours of burn-in. The changes were detected only during the first 3 hours.

Testing this model I realized that MS1 is a half of hybrid IEMs. In fact, it is a good dynamic model that can easily benefit if you add some armature correctly, and I hope that Hidizs really succeeded in MS4 in this regard.

Bass is something that you instantly pay attention to here. It has good depth and firmness that will appeal to those listeners who love rolling and rumbling bass sounds. Of course, the bass is not armature in terms of resolution, however, for dynamic bass, it has rather good speed and this makes it sound well-layered and containing micro-details. Overall the bass is balanced and well-controlled, not interfering into the middle. 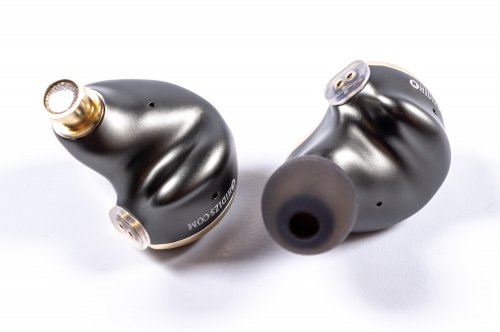 Mids are tuned in the way to have a typical V-shape with a macro-detail accent. The upper mids are almost perfect – they are slightly moved forward and have a good resolution that helps female vocals sound expressive, gives guitars needed aggression and ensures the presence of all other positive moments of accentuated upper mids. Lower mids sometimes lack presence. Luckily it can be heard on some tracks only. The soundstage is average in terms of width and a little smaller in depth, but the separation of instruments and layering are very good, there is no congestion.

Treble is somewhat accentuated, but it is done carefully and is not abundant. However, if you are a treble-sensitive person, I advise you to audition those IEMs before the purchase. Attacks and decays are a little shorter than normal, but in general have good length, although not great. The resolution is good and there is a good balance with bass.

As there are many models in this price category I have chosen only some of them (arguably the most popular) for comparison. 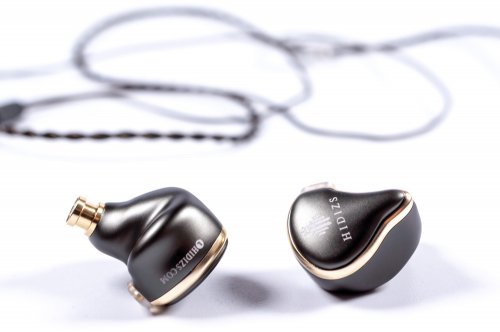 Ostry KC09 How can I omit them? Ostry’s are slightly more flat in mids and have less bass and treble. MS1 has better bass depth too.

Whizzer A15 Pro It is a more flat model as well with slightly better resolution but less weight and depth of bass.

iBasso IT01 IT01 have more aggressive sound with even more accentuated upper part of the frequency range. The bass has more speed than in MS1 but doesn’t have such depth.

MS1 are very balanced IEMs in terms of impedance and sensitivity and they are easily driven by any sources. They are colored and do not require a top player.

In terms of style, the IEMs will suit to the genres with good and weighty bass required – from pop-music to jazz with contrabass. MS1 are not very sensitive to the quality of recording – approximately 5 of 10. 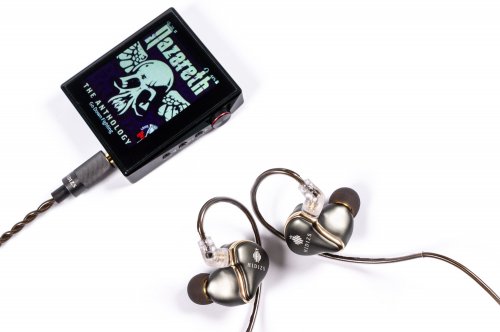 Röyksopp — Alpha Male (Live 2) I don’t like live recordings in general, but sometimes there are exclusions that break my preferences easily and throw them away. This track is exactly the one. With MS1 it will not only provide you with a good rhythm-section but will let you dig deeper into the live concert atmosphere.

Pat Metheny — And I Love Her Of course it is not Wichita Falls, but nevertheless a very good example of guitar jazz. And of course it requires better IEMs (maybe MS4, eh?), but MS1 play this track really well, mainly because of the correct tonal balance.

The Handsome Family — Far from Any Road Shame, but I do not know anything about this band. For sure, I might google it, but for some reason, I don’t want to. Anonymity gives an advantage to this outstanding vocal duet. MS1 cope well with vocal emotions and instrumental part.

While I was writing this review, the MS1 gathered several times more than the goal that was set on Kickstarter, confirming again that crowdfunding campaigns are a success. However, there is enough time and if you search for interesting IEMs for a good price, Hidizs Mermaid may be one of the options to look at.