Hiby needs no introduction among portable audio lovers. They are the main software developers. It would have been strange if they haven’t tried to produce hardware solutions and almost a year and a half we have seen their first portable player – HiBy R6. Now it’s time to speak about renewed version – R6 Pro.

The first try was not bad, but cannot be named as success either. R6 has got good design and polished firmware but high output impedance and too simplified highs. HiBy have understood these problems and decided to solve them in the next revision. The amplification is made with the help of MUSES8920, impedance has been lowered and power increased.
There is no more aluminum variant, now there is only steel. The price has become bigger, on the moment of review it is 800 USD and it can be purchased from official store. Of course if we compare to the price of old steel version the changes are not dramatic, but aluminum version has had smaller price. Of course, steel version looks better. 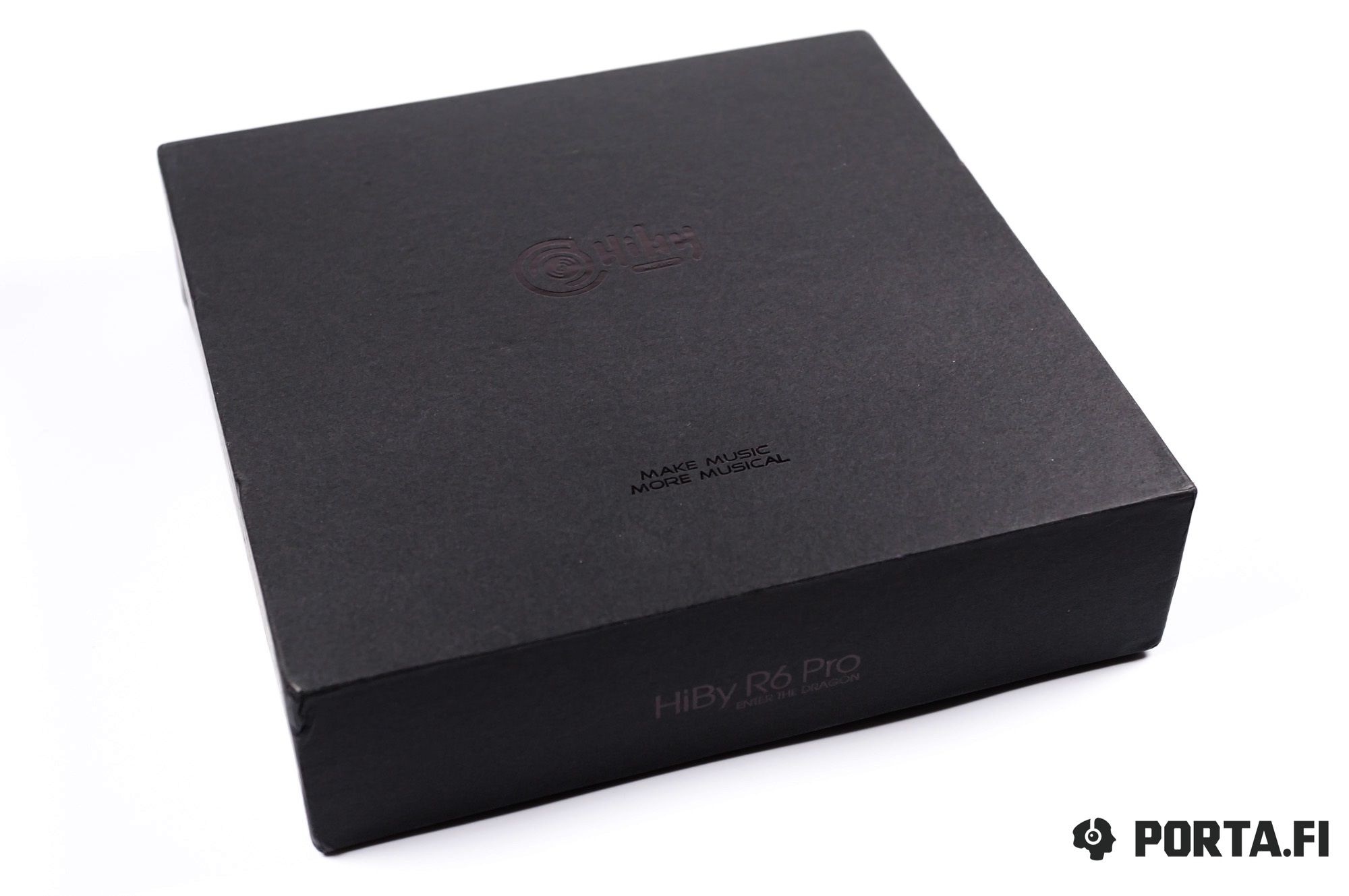 HiBy packaging is always somewhat conservative and this player is not an exclusion. There is no pathos that you can see from other manufacturers – here it is a plain black cardboard box with player and accessories inside: 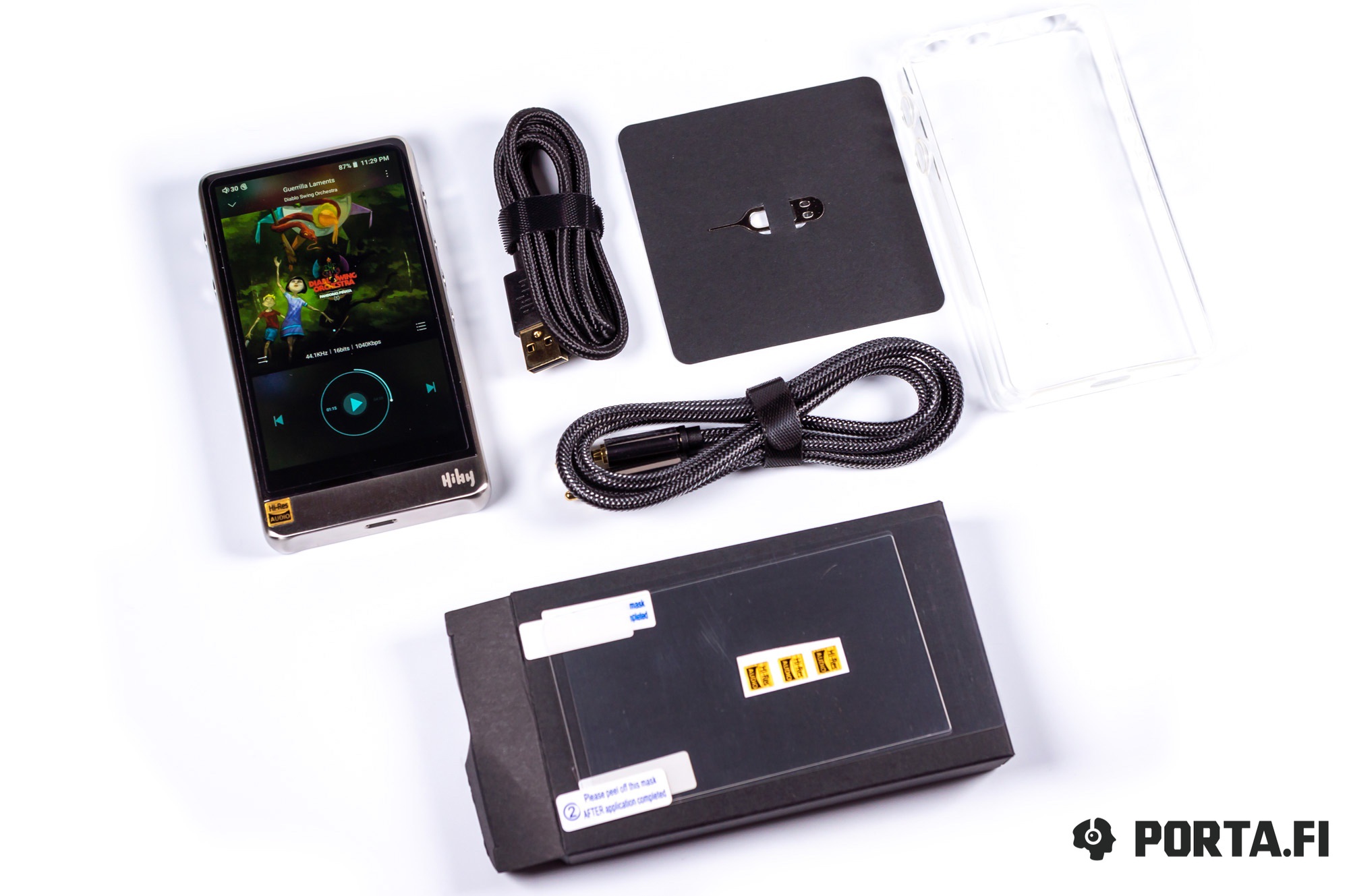 Of course a more serious case would have been welcome, but stock silicone one is good too, and you can purchase additional brand leather one, it doesn’t cost a fortune.

Looking at the player you understand that steel is a good idea. It impresses together with Gorilla Glass from both sides, you even forget about greed and paying too much. HiBy have chosen correct size for the player, it feels just right in hand with pleasant weightiness. Build quality enhances positive feeling. The dimensions are portable, but you might need belt if you expect to put R6 Pro to your trousers – it weighs whole 290 grams.

As usual, HiBy do not forget about the convenience of manual operation, there are buttons on the opposite sides – volume, playback and power button with built in LED indicator. The quality of buttons is good, presses are well registered and they work smoothly without any wobbling. Left side also has a microSD slot with removable tray to protect it from dust, so you will need a tool to remove it. 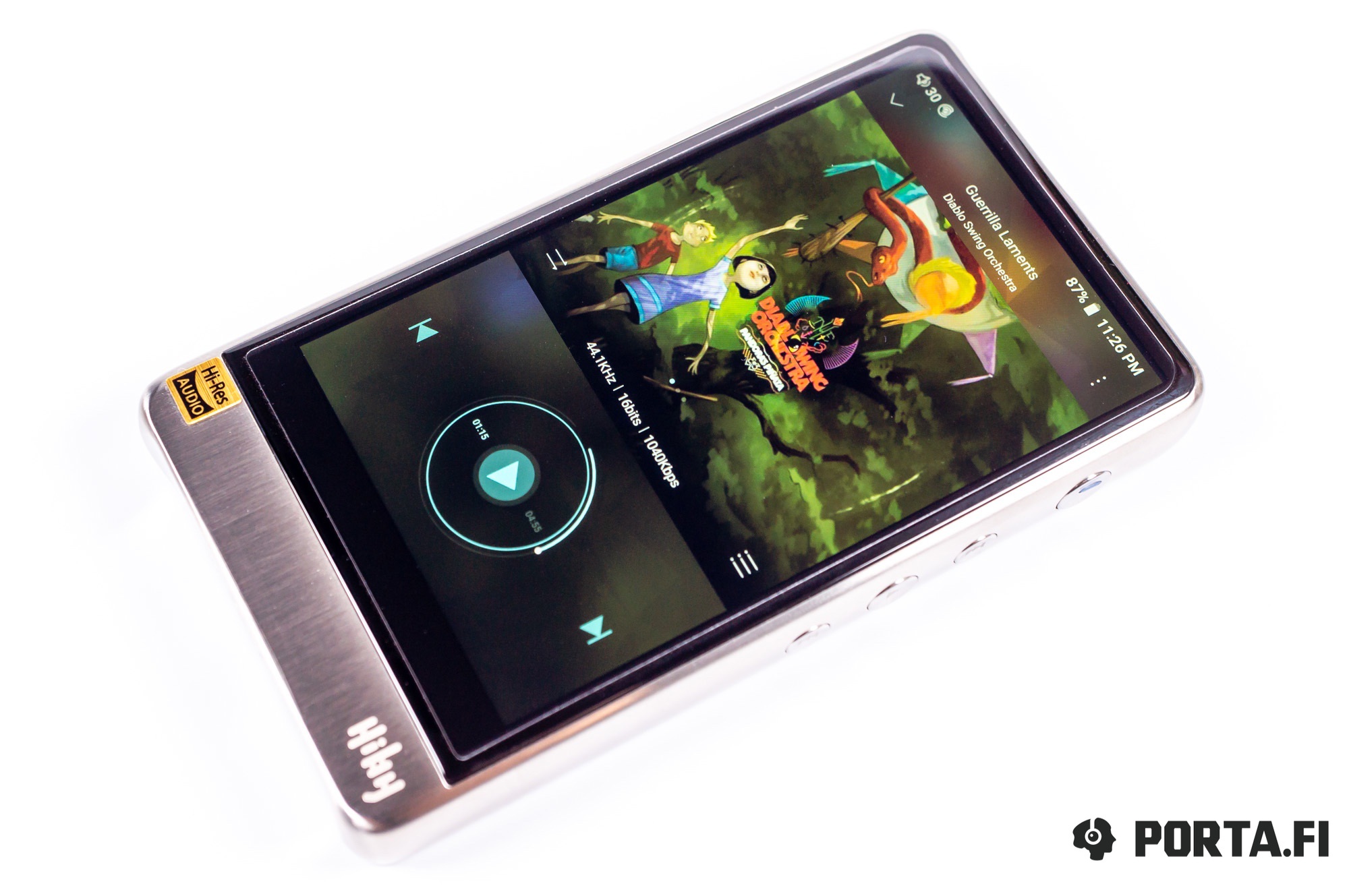 There is USB-C on the lower part, traditionally it is multi-functional, here you get a whole lot of functions – charging with Quick Charge, access to files, output to external DAC and use of player as DAC itself. Quick charge allows to charge the battery to 70% in approximately 65 minutes. Full charge takes around 2 hours and 40 minutes. It will be enough for 11 hours and 40 minutes of single ended playback and 7 hours and 50 minutes from balanced, however it depends on many factors, such as load and screen on time.

The top part of the player has numerous outputs – 3.5mm lineout/coaxial, 3.5 mm headphone out and balanced output – 4.4 mm Pentaconn. Seems like there is a total migration to 4.4 mm from 2.5 mm, it’s a good idea in general.

Screen takes the most part of the front panel and we should note its quality among other players. It boasts good resolution, viewing angles, has good level of brightness and registers taps and swipes without a problem – not ideally, but enough to put the screen into top-5 among all players.

Firmware is simple. Player has android 8.1 and it is one of the models that luckily has Play Store. It also has DTA technology, allowing all apps to sound without internal Android resampler, but if guys on HeadFi are right, this is valid only for 16-bit files, since 24-bit ones are always resampled by Android. 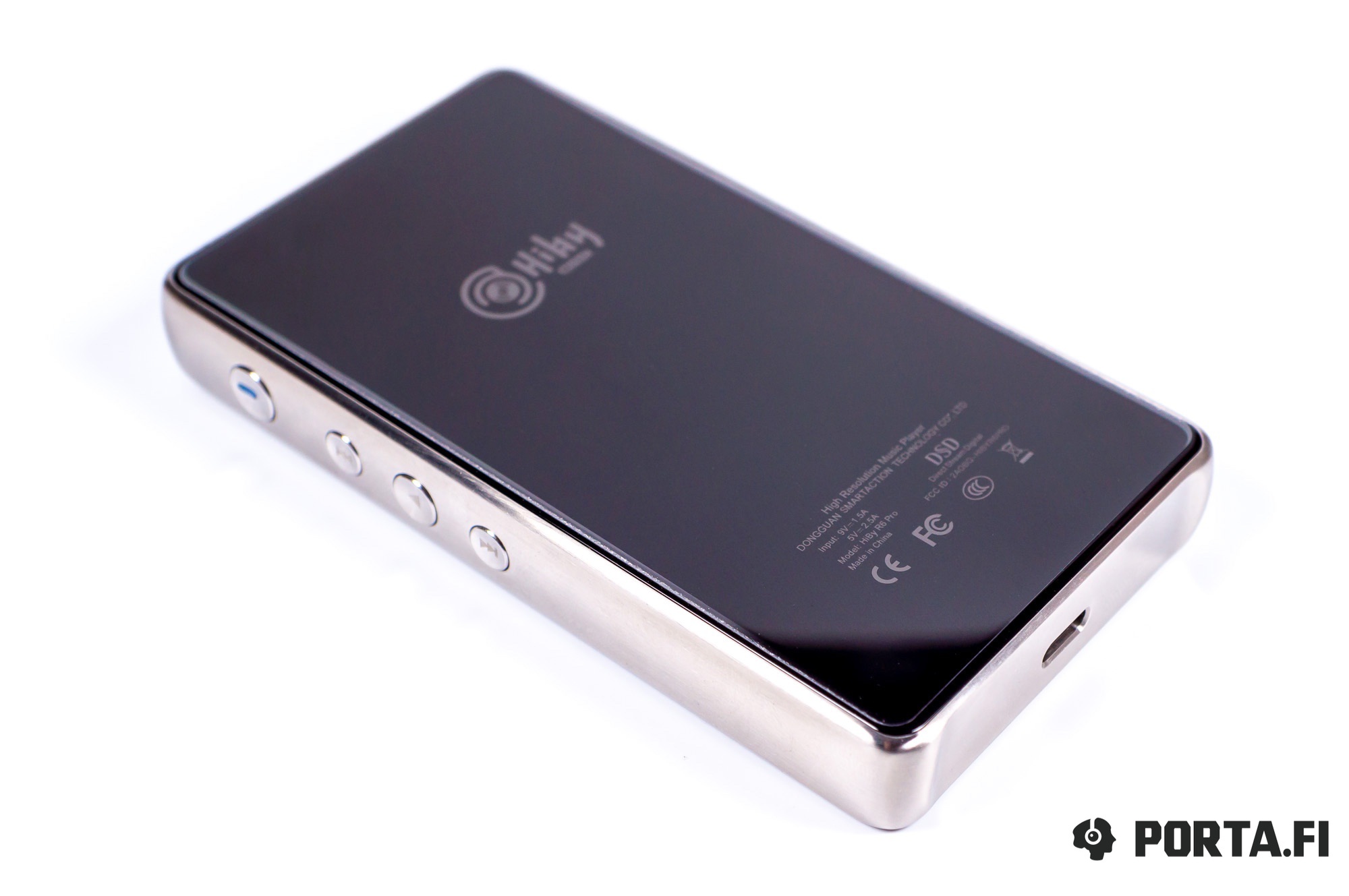 As usual, OS has additional preferences, such as choice of digital filters and gain. Also sound options has choice of harmonics that can really change the sound, and though I am not a fan of this enhancer, I must admit that the result is quite natural.

The heart of firmware is HiBy player that is well known from other products. I won’t go deep into its interface, everybody has seen it, and if not, you can install this player to any smartphone and check it. Interface is convenient and logical. Here we get usual categories of media library and ability to control player via Bluetooth using HiBy Link, and also MSEB equalizer.

I would like to speak a little about the latter a little bit more for those who haven’t used HiBy products before. HiBy has an interesting feature called “Mage Sound Eight Ball” (don’t know what it means). This MSEB allows users to fine tune sound to their liking but with more clear preferences, such as thickness on lows and vocal emotions. You just move the sliders from soft to sharp and MSEB converts this into certain DSP preferences. Those effects can be achieved in a manual way using equalizer, especially if there is a parametric equalizer option (my favorite way to tune the sound), but for beginners MSEB works as a charm. 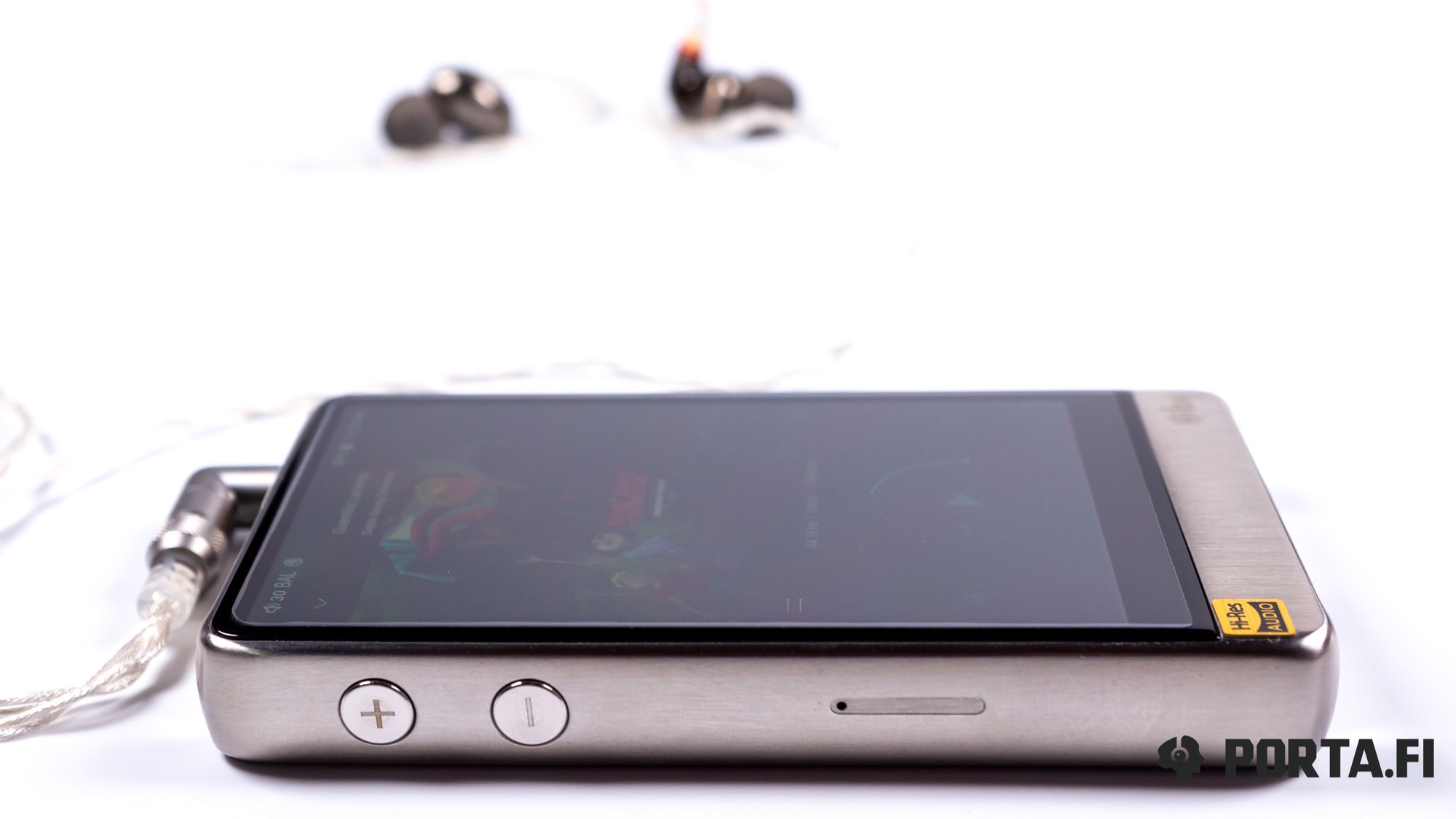 The firmware is stable and player has got good chipset that brings smoothness and allows to avoid lags. There are no major flaws with firmware here – stock player and other apps are working without any problems, of course if you don’t entertain yourself by downloading torrents from device.

HiBy engineers have correctly underlined the changes they have needed to perform since the first release. That’s why the low part of the frequency range is the same and highs have been altered to correct previous problems. So the previous model lovers will be glad, since general character is the same – player still offers massive sound but the changes bring more naturalness to it. 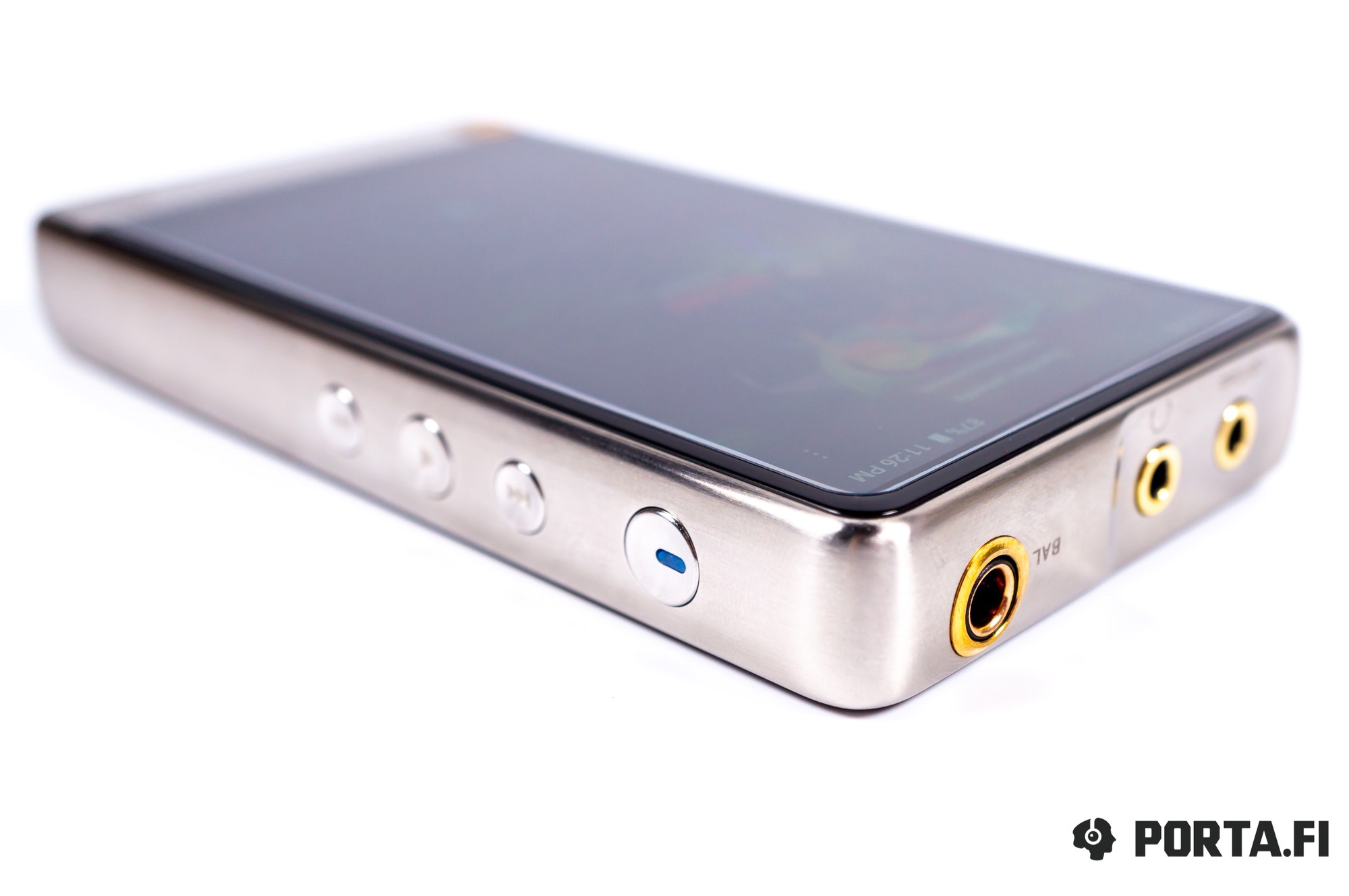 The bass is massive with good weight, slam and thickness. The resolution is good but not maximal, and lows are not dry. Bass goes as deep as possible and has good control. It does not mix with mids and it is good achievement given its character.

The mids are played as a whole. Player does not try to play in audiophile neutral way and reveal micro details. Instead it offers monolithic sound not sacrificing resolution. As a result we get a weighty presentation of vocal and instruments that underlines emotions without too much dependence of recording quality. Soundstage is slightly above average in depth and width but instrument positioning and layering are very natural.

Highs are perceived a little drawn back but they have been seriously reworked in Pro version, so they sound more natural and lengthy and do not sound condensed or synthetic as in the first revision. The length is not quite there, but it has been improved a lot. Highs have good layering and close to natural attacks and decays, so they cope with balance on lows and revealing all overtones and decays. If you are sensitive to treble, R6 Pro is a good player to try in upper-mid segment. 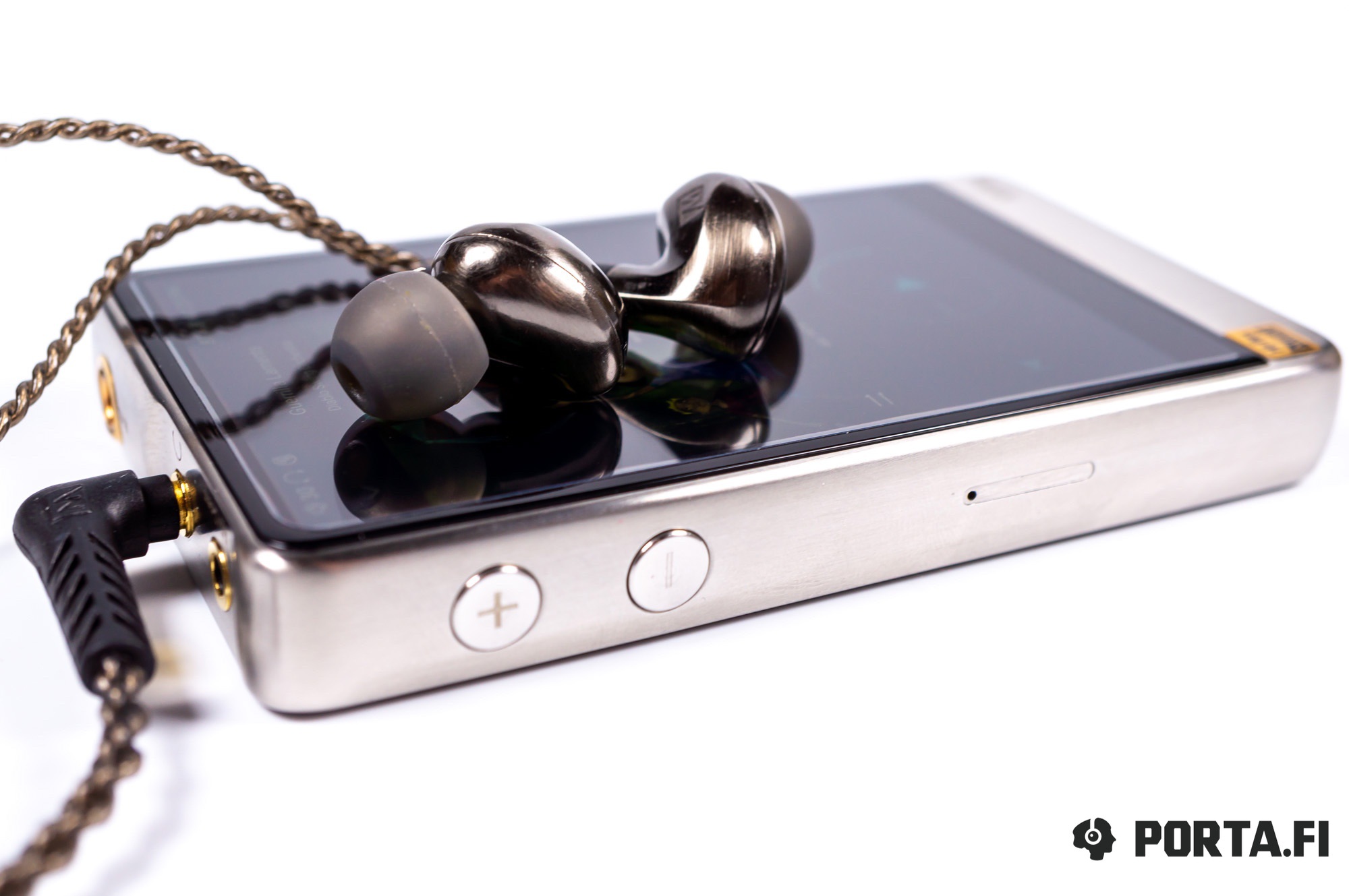 It’s hard to compare R6 Pro to other players as it has its own character while his competitors are concentrated on producing a universally neutral sound, but the review won’t do without comparisons. I won’t compare functional differences, only sound, as you can easily compare the rest yourselves.

HiBy R6 We have already spoken about difference, so I will conclude. R6Pro is more natural, airy and has better timbre, especially in treble department. It doesn’t have problems with multidriver armatures.

FiiO X7-2 Despite being quite old now, FiiO flagship keeps to its competition. It also has more microdetails and less massiveness, but does not sound as monitor as M11, making a step towards R6 Pro.

iBasso DX220 iBasso controls frequency range a little better and has more micro details as well with less massiveness on mids. Lows and mids choice depend on signature liking, but 220 is clear winner in treble department having better length and quality. 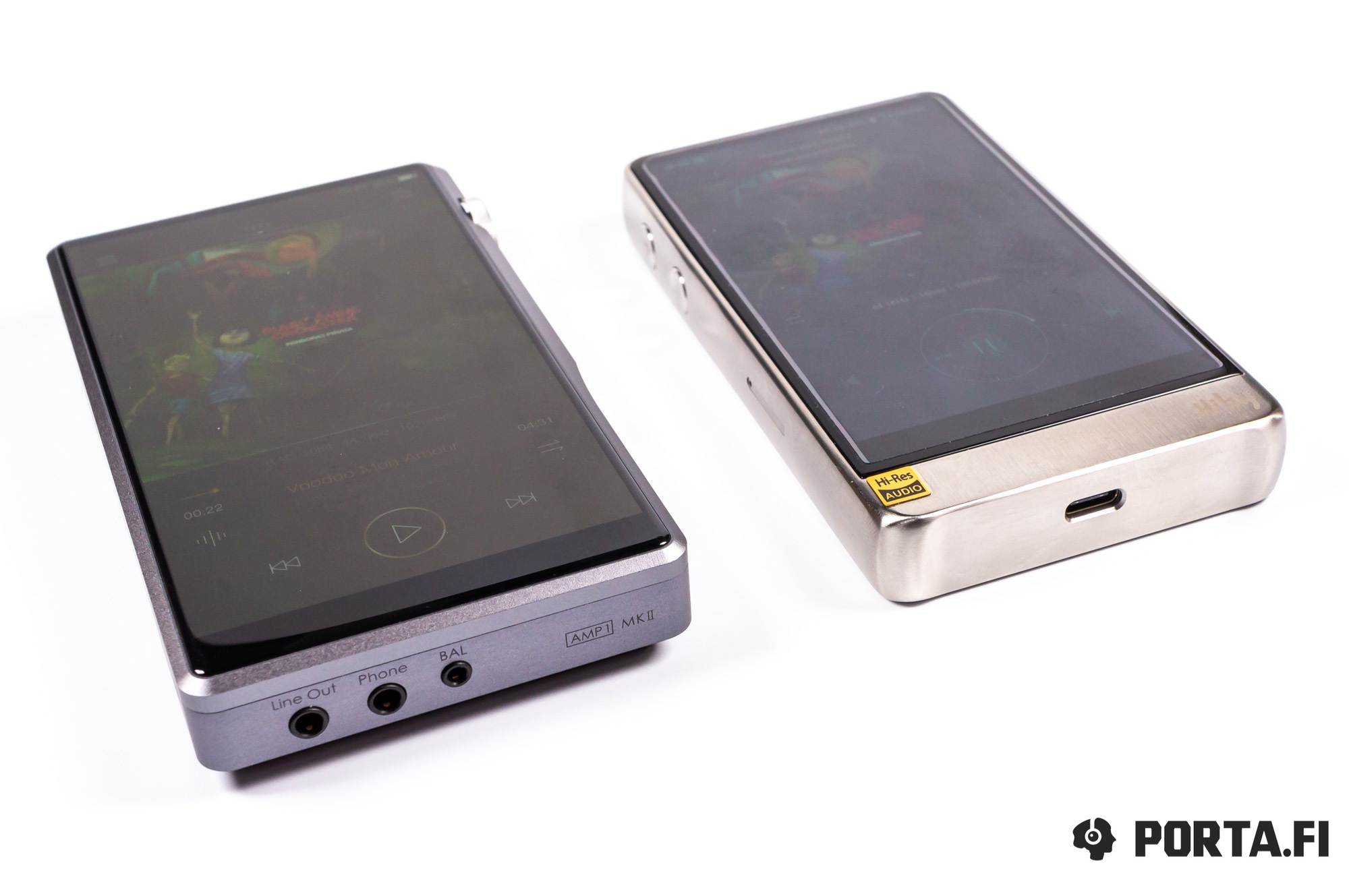 This time we can write nothing here and leave it like – everything is okay. Impedance has been lowered almost to nil and there are no problems with multi driver models, there is enough power for almost all headphones,including many hard-to-drives. One downside – it has background noise if you listen to very sensitive IEMs balanced, but you can use attenuator or listen to single end, as the difference between two outputs is almost non-existent.

Player is universal in style and it’s up to your liking. I like this kind of presentation especially with jazz, vocals and classic rock but of course it is not limited to it. Sensitivity to recording quality is somewhat 7 out of 10. 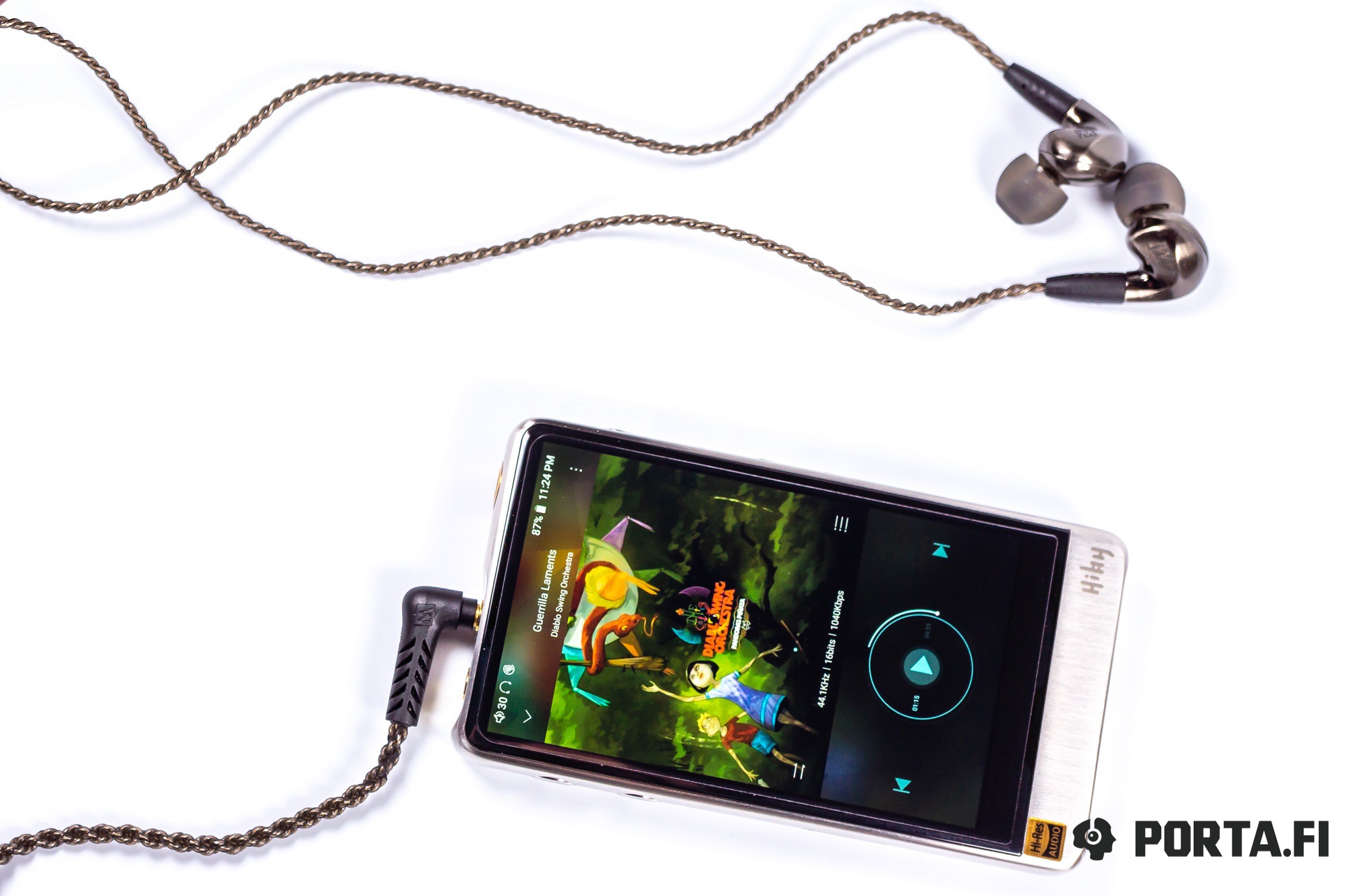 Dave Brubeck — Blue Rondo a la Turk If you think only serious prog-metal players can astonish us with strange metric signatures, it’s not quite correct. Jazz players have done this long before it has become mainstream and this track is a good example. In the year of 1959 Dave Brubeck has been inspired by Turkish approach and rhythms in music and has composed this composition in 9/8 signature that is sometimes switched to 4/4. But this is not as striking as the naturalness in bass line that is revealed by R6Pro.

Burial — Claustro William Bevan fans have had to wait for two long years, but it has not been in vain and new Burial album has brought new interesting ideas mixed with his talent. The track illustrates its name well, the braided vocal parties can really bring the claustrophobic effect that is mixed with great bass line well played by HiBy R6 Pro.

Volbeat — Last Day Under the Sun Danish musicians from Volbeat successfully mix rock’n’roll, stadium metal and rockabilly with brand 80s sound bringing the fans back to the times when men and women have had similar haircuts and leather jackets and banana pants have been on top of the fashion. HiBy R6 Pro is very good for this track, underlining full-of-drive rhythm section and playing emotions well. Back vocals are outstanding on 3:25.

This is the ideal example of corrections when the best from the first revision has remained intact (speed, comfort, weightiness) and disadvantages have been eliminated (impedance, too simple highs). If you look for a comfy and modern player with massive and not vivid sound, R6 Pro is a good choice.