Cable choice is quite personal. Not everybody believes in its influence. However, the reality does not suffer if someone does not believes in it. Another thing is how much you are willing to pay for spare cable. Our todays here is notable for everything, really. Impressive 22AWG, pure silver, coaxial construction. And corresponding price. On the official website it starts from 799 dollars. The resulting price may increase depending on cable length, connectors, other additional things… Probably, this is all. The website is well made and you can choose the setup you need and get the price for it. You can get any connector you need and this cable is available for both, IEMs and over ear headphones. Order completion time can be different and usually takes several months. The cables are hand made by Peter Bradstock, the founder and ideologist of the company. Hi has a degree in biochemistry. His passion to this science have provided name for brand and its products. The production is done in Texas, the USA.

Not too important. Among notable things there is a brand pouch with company logo. It is rather simple rectangular leatherette envelope of white color. No fancy packaging, no additional accessories. This way you understand that all your money goes to cable and not to unneeded things such as triple packaging and fancy printing. And again, what accessories you might want in box with the custom cable? Headphones and player? 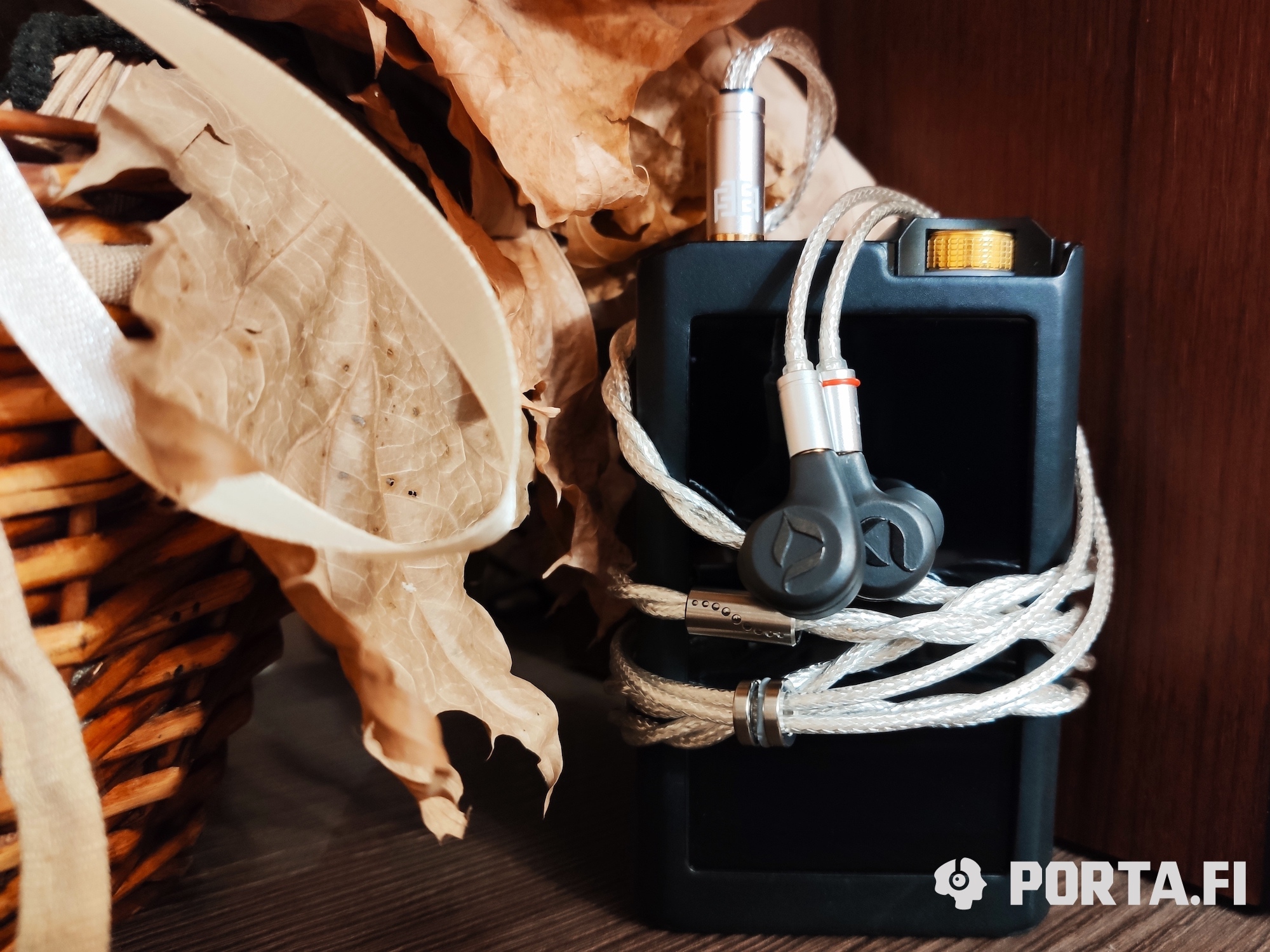 One impressive peculiarity of the cable is its compactness. Relatively, of course, since 22AWG is notable. I have seen the same in other cables and they are bulkier and less convenient. For example, Toxic Cables Hydra and Dunu Hulk are twice as thick. They use away from home is a trial. Both cables sometimes make IEMs fall out of the ears during real portable use. Clone Silver is of course not the example of ergonomics, but its use is rather convenient. And the feelings are quite contrary — by looking at it you think that it won’t be convenient on-the-go, but this is not the case. It provides the same convenience as other cables, even those that are thinner.

The secret lies in coaxial constructions. Positive and negative conductors are braided around a single center. This means the cable has its core and screen. The transparent coating allows to see the beautiful braiding of the latter. All this provides needed compactness. Instead of usual 4 or more conductors there are only 2 here, and 1 (!!!) above the split. The isolation is rather soft. The cable is not very stiff, it’s softer than expected, but slightly more hard than you might want. For example, the same 22AWG in Norne Audio Silvergarde SX are softer. However, this cable almost lacks microphone effect and again, it’s not very different from other, smaller, cables on-the-go.

Also DHC use quality connectors. For most part, Eidolic are used and you shouldn’t have concerns in terms of their reliability. The split has different options — of the same brand or DHC. I have the latter variant, the weighty part with labyrinth picture. 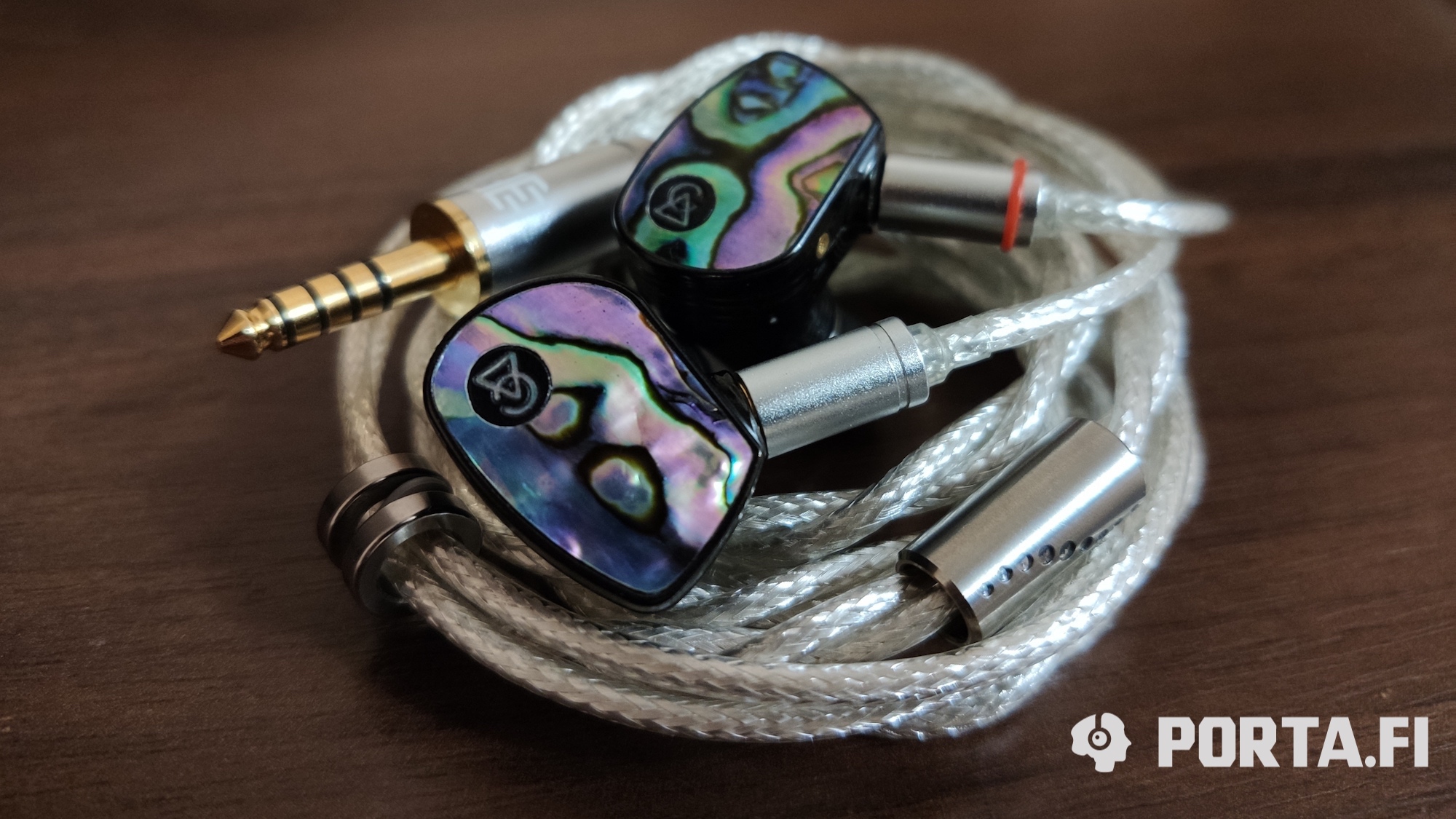 Double Helix Cables is the company that is pragmatic with its cables. This means no magic. What is important about the cable? The conductivity. Silver and copper have the maximum of that. These metals are heavily used by the company for their transducers. Any mixtures diminish purity and as a result conductivity. Even the alloy of abovementioned metals. So technically there is no sense in having silver/copper alloy and addition of gold, platinum, palladium and any other materials. All this only leads to loss of conductivity.

The company underlines that real purity of materials is 4N, i.e. 99.99%. The rest are mixture. In theory you can get even better purity but such transducer would cost much more, even if it’s copper. This means that if the conductor manufacturer doesn’t have more purity than 4N, the cable makers won’t have it as well.

As for sound, we get the same openness, honesty and directness. The result is very good. First of all, the cable has transparent sound, int eh good sense. I can’t say that it makes accents on any part of frequency range. On the one hand, the cable does not add anything to sound, and on the other, if it adds anything at all, is this transparency, distinctiveness and purity. Without making sound dry or emphasizing of the soundstage and without “silver makes sound brighter” myth some people believe. It’s notable that the sound becomes more free, airy and natural. There also is slight tending for micro details. As a result, the separation becomes better as well as their shapes and positioning become more precise. Dynamic range becomes better as well, together with informativeness of the composition. 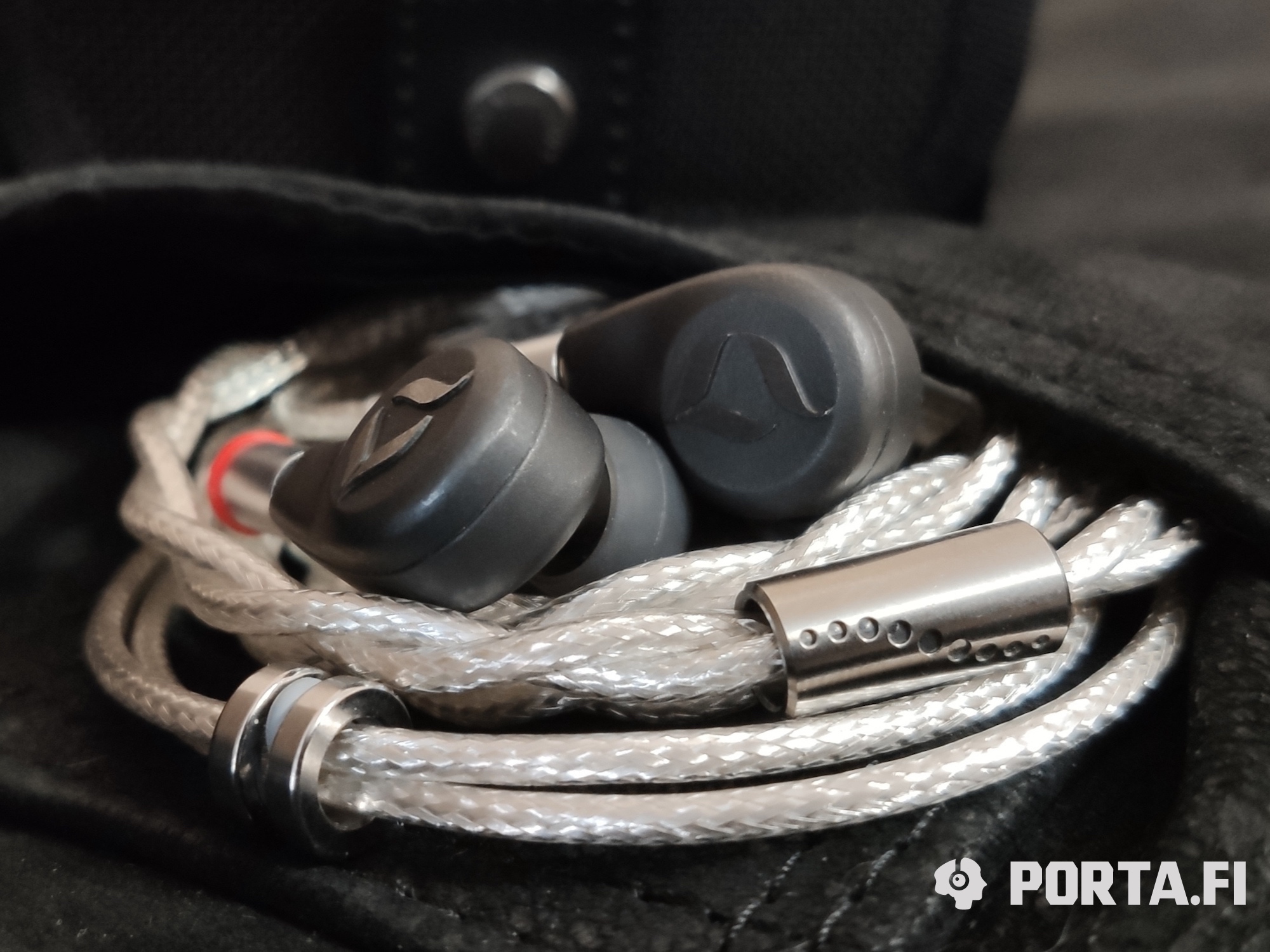 Lows get the abovementioned purity. Due to this they preserve correct weight and thickness and at the same time become more shapy, with their weight being accompanied by good slam. This provides bass with well variation and control. On the other hand different nuances and peculiarities of the of the instruments become more notable with slightly increase for the most lower lows. It’s not about their quantity, but better length and control. As a result, their influence on whole musical canvas becomes more notable. There is no cluttered sound that is usually called analogue, but increase in naturalness due to good shape, positioning, intensity and variability of slams. It’s quite notable when the slam is made not on the centre of diaphragm and you can easily hear different strength of such slams. Apart from that the textures become better. Those are the nuances that may be considered non-important themselves but bring needed character and liveliness to the music and makes it live and real.

To some extent we have the same situation on the mids. The focus is moved to micro details. This makes the nuances of sound more notable, as well as the technique of instruments and vocals. Sometimes the cable can be a good instrument to analyze the composition, of course if headphones and source allow it. On the other hand the focus on micro details is not dominating, it doesn’t lead to pixelation and other digital coloring. On the contrary it seems to make more focus and make music sharper. The sound gets more freedom and depth, becoming more natural and emotional on the one hand and close to the recording on the other hand. Here we can also not call the recording dry, but rather having more shapy instruments, that are also more natural and distinctive, correct in their size and positioning. Compositions still sound whole. The timbres become more correct and emotions are 100% transmitted, there is no tending to dramatizing or oversimplifying of the composition. This means that both vocals and instruments are duly natural. All effects are transmitted well too and you can tell the difference between guitars. The breathing of the vocalist, speech near the microphone and the rest won’t go to the first place but are the important part of the entourage and are important for liveliness and naturalness of the composition.

On the other hand, the cable doesn’t bring that wholeness and warmness that brings mids to the front and is usually more pleasant to the listener, but is less honest to the composition. Everybody here is in equal rights. But I have to say that this makes sound more distinctive and convincing.

At the same time, if the recording has enough wholeness and fluidity, this is transmitted fully. This means that it is a real pleasure to listen to thick and saturated musical canvas.

Highs get slight additional length. On the other hand, they become more pure, less vailed and don’t have any smoothing. The same as in other parts of frequency range, there is better control and resolution. But there is no overemphasizing. You won’t get more highs in terms of quantity, they are not moved forward and are not more noticeable than other parts. In other words, there is a very good balance. Of course the improvement is there, but it is quality, not quantity. So if we speak about more distinctive part of some instrument, it can be more distinctive due to better nuances of its sound and not accents. This said, the presentation of instruments become less rough, more natural, easy and accurate. The layering becomes more noticeable and this adds to realism. There is also increase in the dynamic range and this makes highs sound more lively. At the same time, there is a clear improvement in black background. This makes instruments sound more distinctive and natural with good positioning. The attacks are more shaped and quick, but this doesn’t sound dry. Better decays mean more precision, for example in terms of reverberation where you hear everything up to total decay. 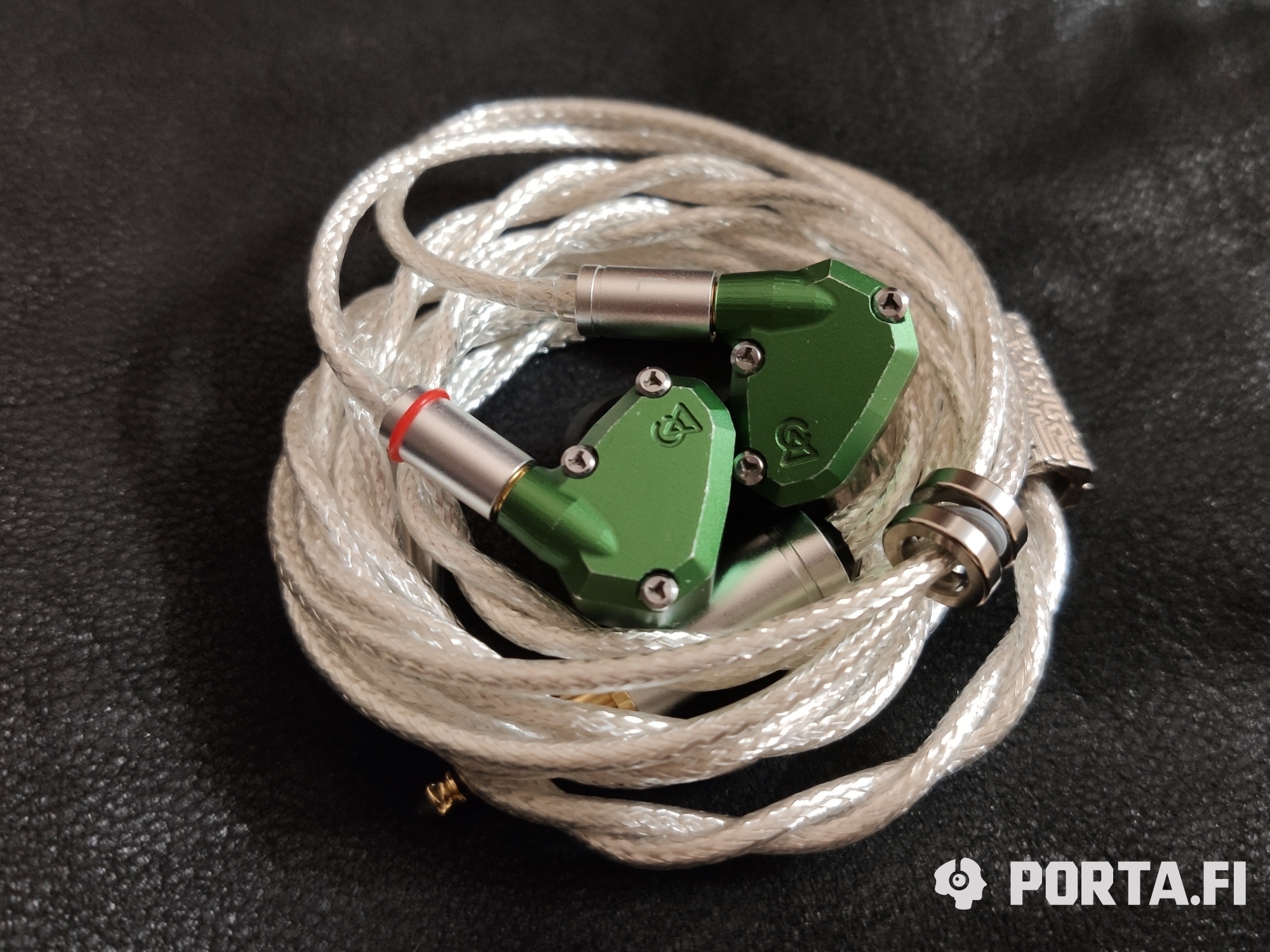 The criticalness to the recording quality becomes stronger. The cable is not a critical instrument to see the composition under the microscope, but it’s better to have a good quality recording. Cable shows peculiarities of the recording, both bad and good. So if the live recording is thicker than the album or Japanese remaster is brighter, you will notice it.

The soundstage, in its own turn, gets more volume, it’s better in width and depth. There are no signs of overemphasizing or massiveness. This is possible because of keeping correct size of the instruments and their communication with each other. The visualization of composition becomes better, each instrument keeps individuality, being notable and important part of the whole sound canvas. At the same time, there is enough air among the instruments.

The quality of the setup is measured by the weakest part. The cable won’t make your headphones different and move them to the top, their combination with cable is individual. But you have to make correct choice. I can’t recommend this cable to everyone. Due to the abovementioned reason as well as its price. 800 USD is a price of good source or headphones, or even both. But when other components are equal or close to top, it’s better to think about cable choice. Here DHC Clone Silver clearly shows what the good cable can sound like with good source and headphones.