I love each innovation in audio world and it’s twice as good when Ukrainian people become the innovators. Everyone knows Ukraine not only as a country with custom-made items (for example Carbon Final or Project Heaven), but also the country where desktop rigs are manufactured — good examples are Flux Lab and S-Audio. Rinaro in Lviv produce drivers for one of the best over-ear headphones — Meze Empyrean.

Kyiv has it’s own magicians and they exist for many years. We will speak about Ambient Acoustics. Not only they are the only who makes custom IEMs in Ukraine, but also they have become the first well-known audio brand in foreign countries. 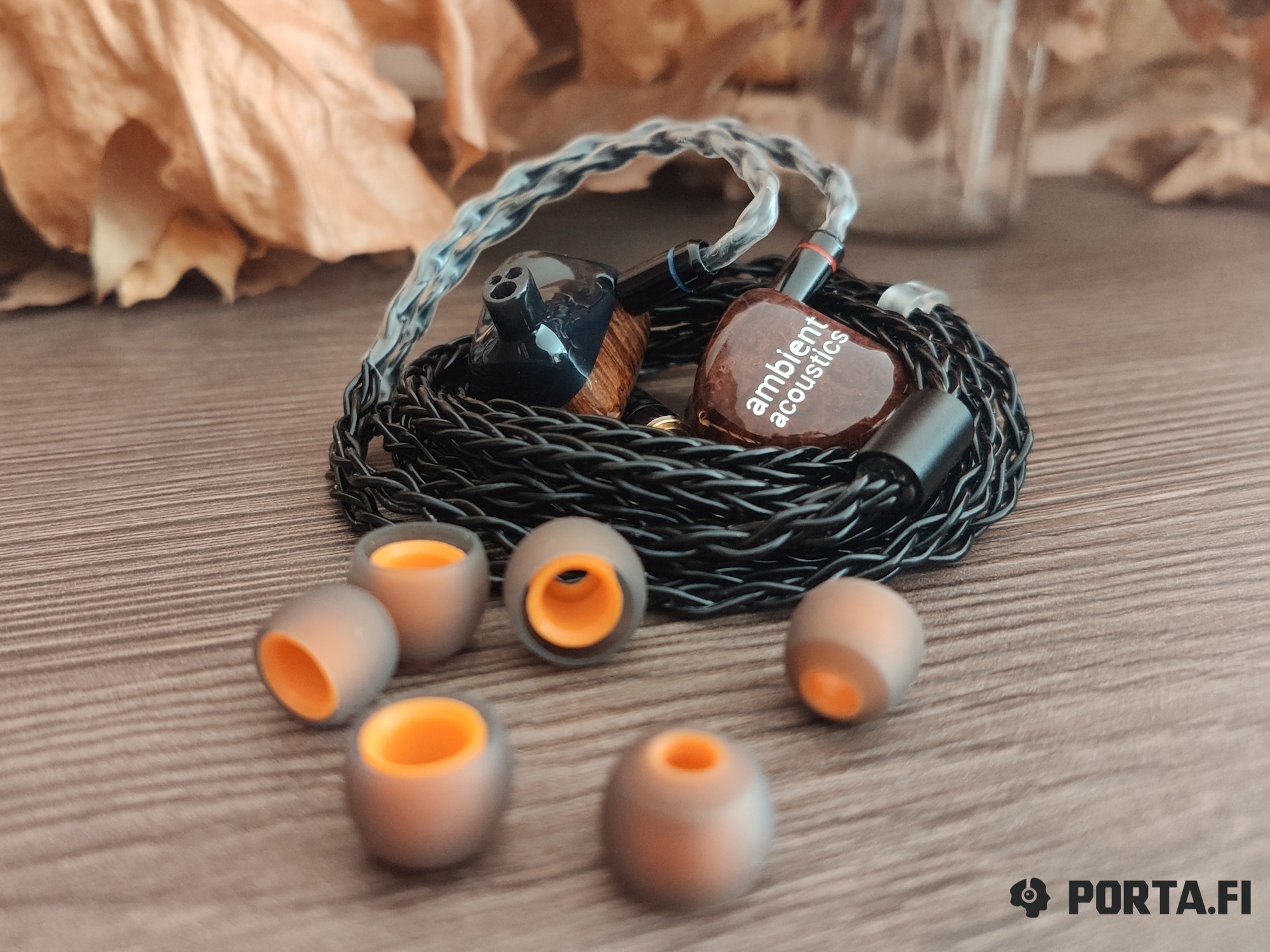 They have enough experience, they also manufacture hearing-aid devices and stage monitors for musicians. However, luckily, they also produce audiophile models. Using unique constructor on their website one can spend enough time choosing individual design and more. You can choose accessories, cable configuration — color, length, connectors and so on. Since tops usually illustrate company capabilities, let’s speak about them — mighty MAD24. ‘Custom monitors with 24 drivers, without crossovers with linear electric phase and unknown before precision and details level, having unique 3D sound stage’ — this is approximately how manufacturer present their top model. Well, he knows better about applied technologies and who is interested can easily find out everything on their website. As for sound, let’s take a look since I’m usually skeptic and all technologies have value for me only if they prove to really be successful. But let’s start with packaging and accessories. 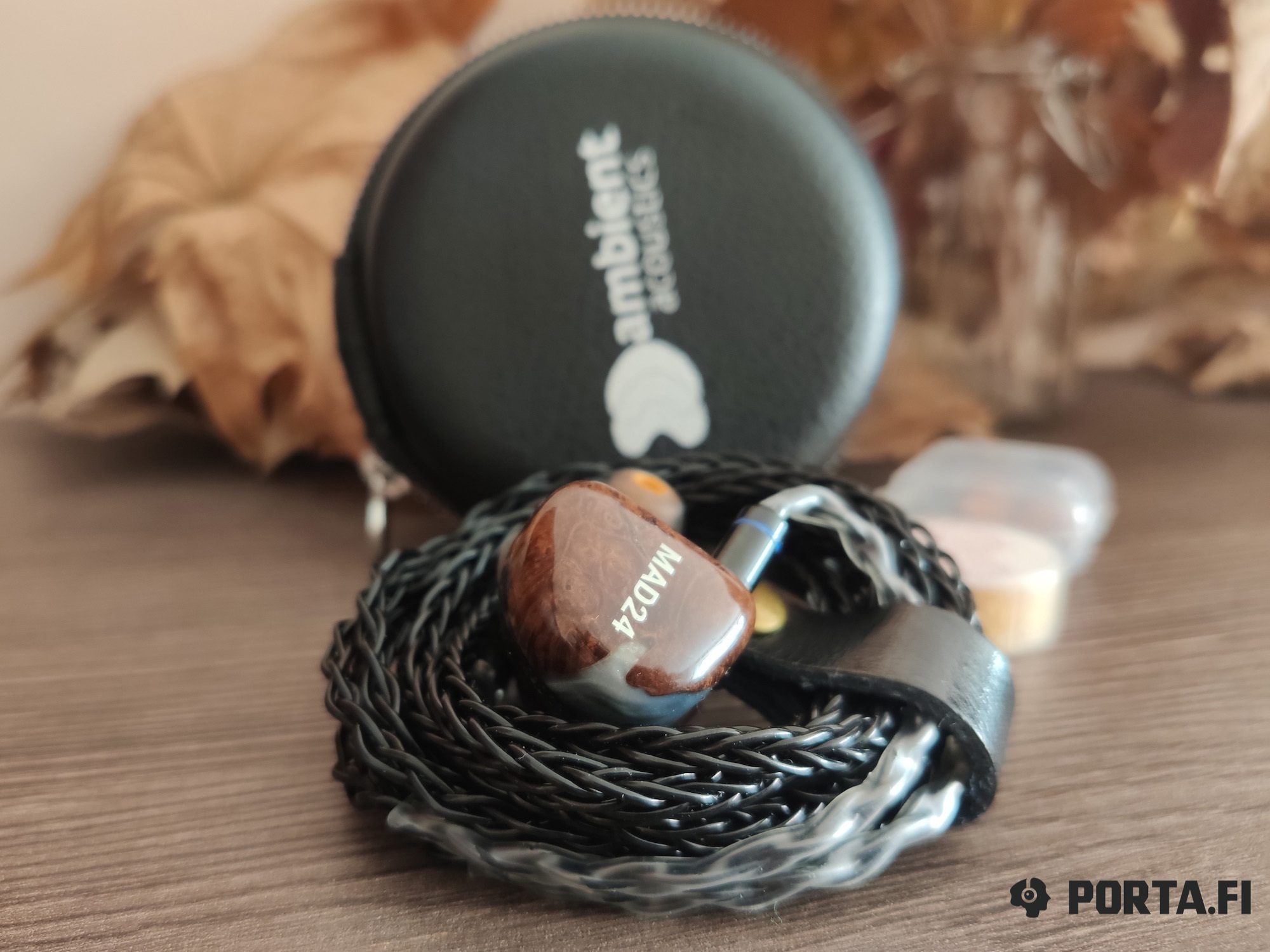 As I have noted, the accessory range can be broadened depending on what the buyer wants. The stock variant offers: cable (8-thread from silver-plated OFC), named Pelican case, brand round zipped pouch, drying capsule, cleaning tool, instructions and warranty card.

You can also order the following extras: named waterproof case, extra drying capsule, fabric pouch and another cleaning tool. There are not many extra options in this case, but since the stock range is really good, there’s nothing else to desire.

Let’s go to one fantastic thing. Brand round zipped pouch. It can suit to any Campfire Audio model really well. It’s outer part is artificial leather, but of very good quality. Inside is the pleasant soft material. The lock is YKK, made of metal with pleasant operation. Outside there is AA logo. The pouch is not only hard but also very convenient. As a result we get plenty of space and great functionality. 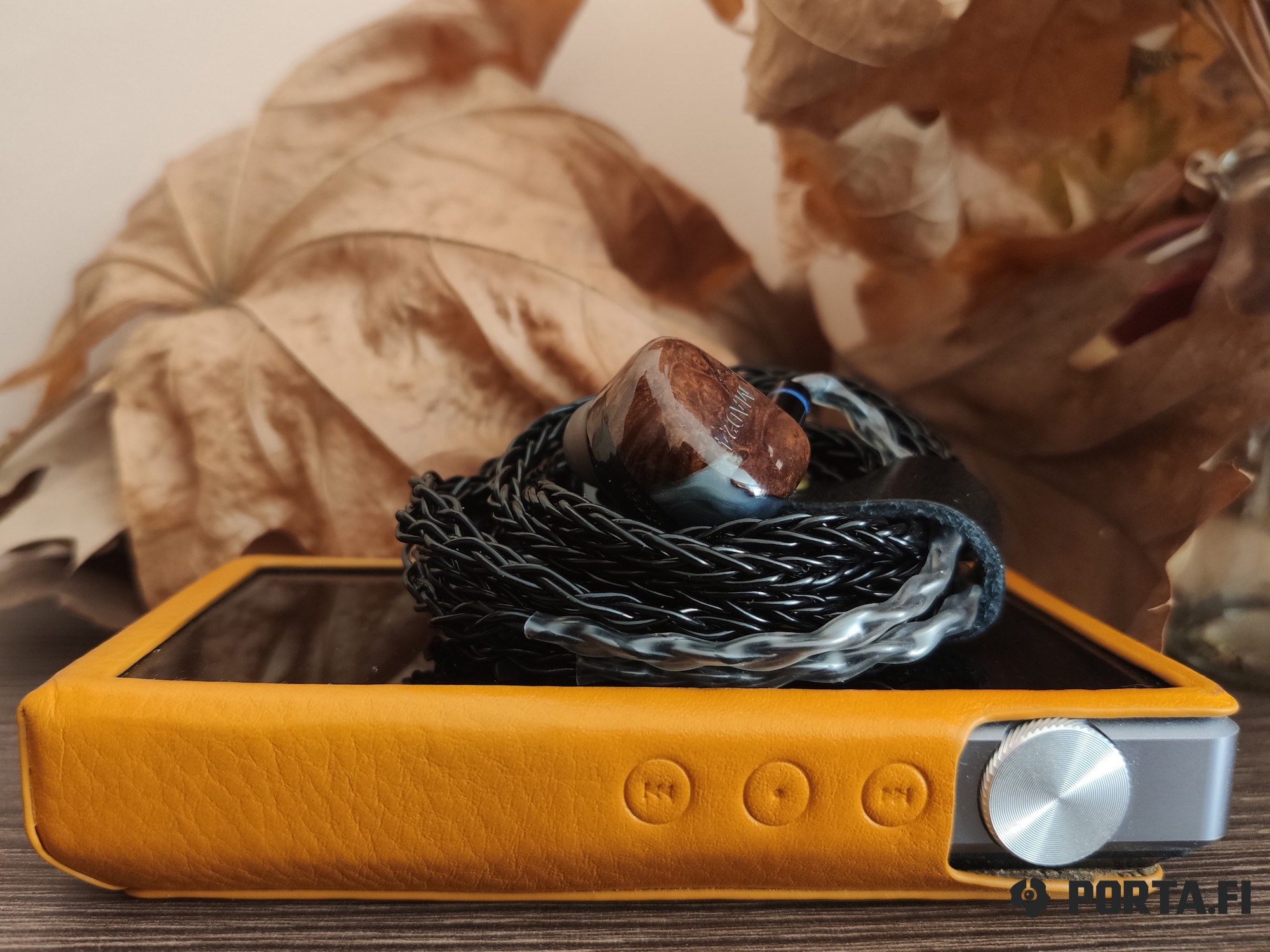 It’s not strange that IEMs are rather large. I have received sample model and of course it is made universal and not custom. Combined material is used. Outer part is a stabilized wood with company logo and name of mode. Inner part (together with nozzles) is black plastic. The bodies are produced on precise 3D-printer and have no spare space inside. This make all resonance absent. As for appearance, everything is neat, given that the material is different. The IEMs look whole and you can tell the division of materials only by change of texture and color.

The shape is no surprise as well — regular universal version of custom IEMs. Rather large, though, but it can be understood. Armature drivers are small enough but with this amount of them… However, I can’t call them very large.

The nozzle is of non-standard oval shape. It has 3 holes and there are no projections for better tip grip, but they are not needed, since AA have taken care about the tips. They differ from what we are used for. They are similar with Symbian in outer appearance, but they are totally different. The stem is much wider and from the other side the diameter is slightly smaller than nozzle. It’s made to make the setup easier and to get a sound that is closer to custom variant.

Fit is comfy. Of course IEMs project from ear but everything is comfortable and besides it looks normal comparing to some TWS offerings. 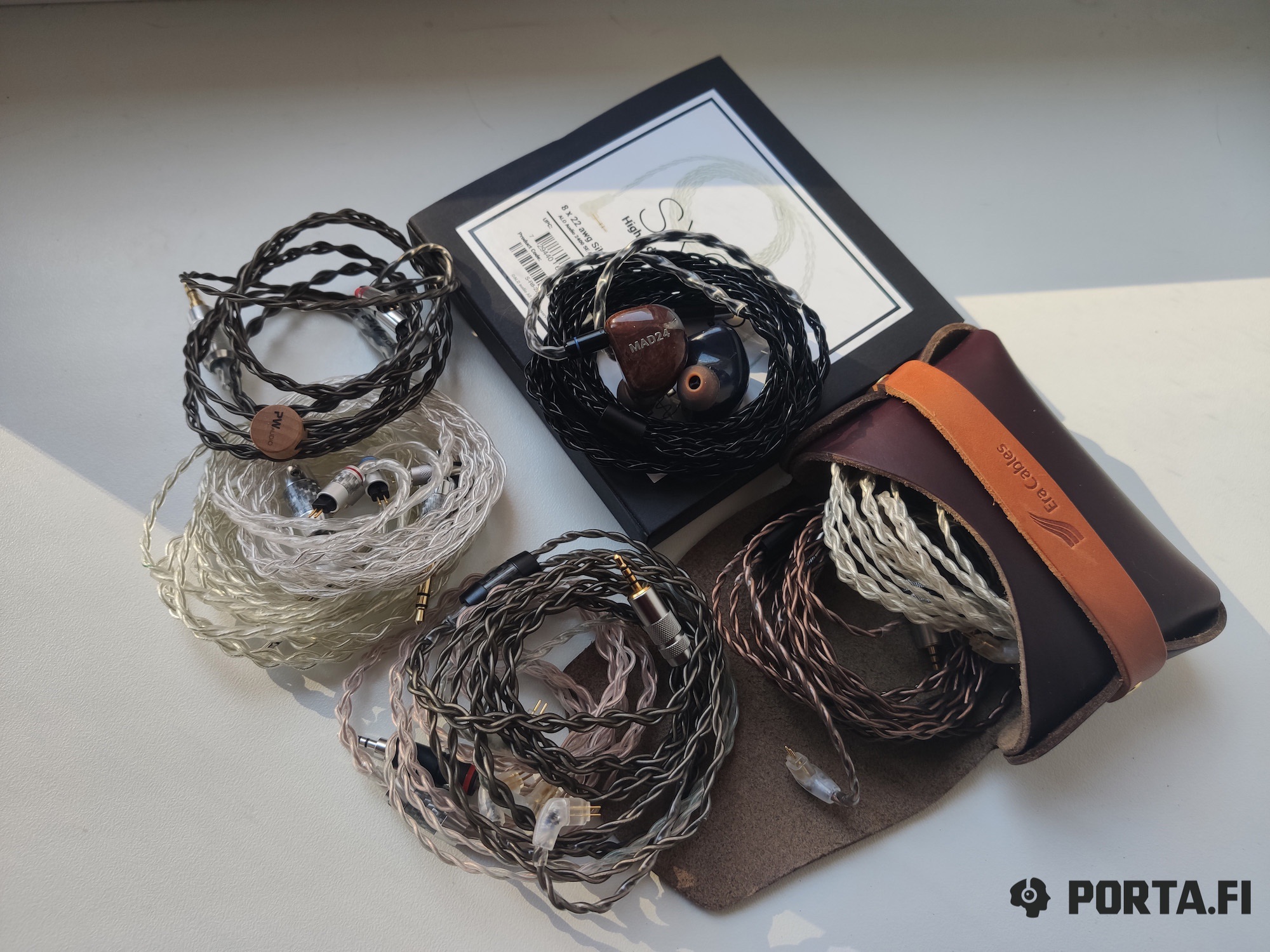 Cable is 8-core with good braiding (somewhat resembles A&K variant). The connectors are reliable. Ergonomically the cable is convenient — it’s soft and lack microphone effect, let alone memory effect. There are pre-formed ear hooks. Cable is two-pin. Even given that the IEMs lack crossovers, there is some effect of cable rolling. Despite the fact that the stock cable is good I liked silver cables such as PW Audio, Whiplash Audio, Effect Audio and Dita Audio. I think that Toxic cables, Double Helix and others will also show themselves good but you have to check it. They also allow to get rid of some disadvantages, but more on that later.

First that I’ve paid attention to is a mature and full sound with good positioning of instruments. Everything sounds whole, with good macro details and musicality but with great amount of nuances and without usually present slowness peculiar to multi-driver models. Frequency range shows from 10Hz to 22kHz and it is the case when given the sound quality you believe them.
Of course, the sound of custom version can be different from universal one, but the sound signature is the same — full and mature. Firstly it seems that lows prevail, but in fact the IEMs are rather flat and do not have abundant accent on anything. Also they do not make any part of frequency range smooth.

So, the lows. They are well defined. If the bass needs to be slammy and monumental, it will be so. You can’t even say that the IEMs have armature drivers for lows, since their sound has needed thickness and mass. Also lows have usual for armatures control and speed. This however doesn’t mean that they are dry or overly thick. Lows have needed emotions and textures. Due to good dynamic range the sound is very natural both for timbre-rich instrument and generally for range. The slams are distinctive and shapy and full of variations.

The same can be told about mids. They are clean, but not smoothed. The sound is distinctive and you can easily hear the shape of separate instruments, while good level of details and dynamic range allow to make all instruments sound natural. The sound is not totally neutral though and has some warmth, tends to be whole. This transmits composer’s thoughts well. Male vocals do not prevail on female, they sound distinctive and convincing as soon as you have a good match with source, of course.

Highs are lengthy enough. Most of IEMs have a decrease after 10-11 kHz, but not these. They really have good length on highs, as well as good level of details, control and speed, but not forgetting about fullness of the frequency range. They won’t forgive bad recordings but won’t sound too harsh at the same time. The balance is good and they have enough speed for attacks as well as neatness of realistic and natural decays. Due to good length the parties of timbre rich instruments sound really well. 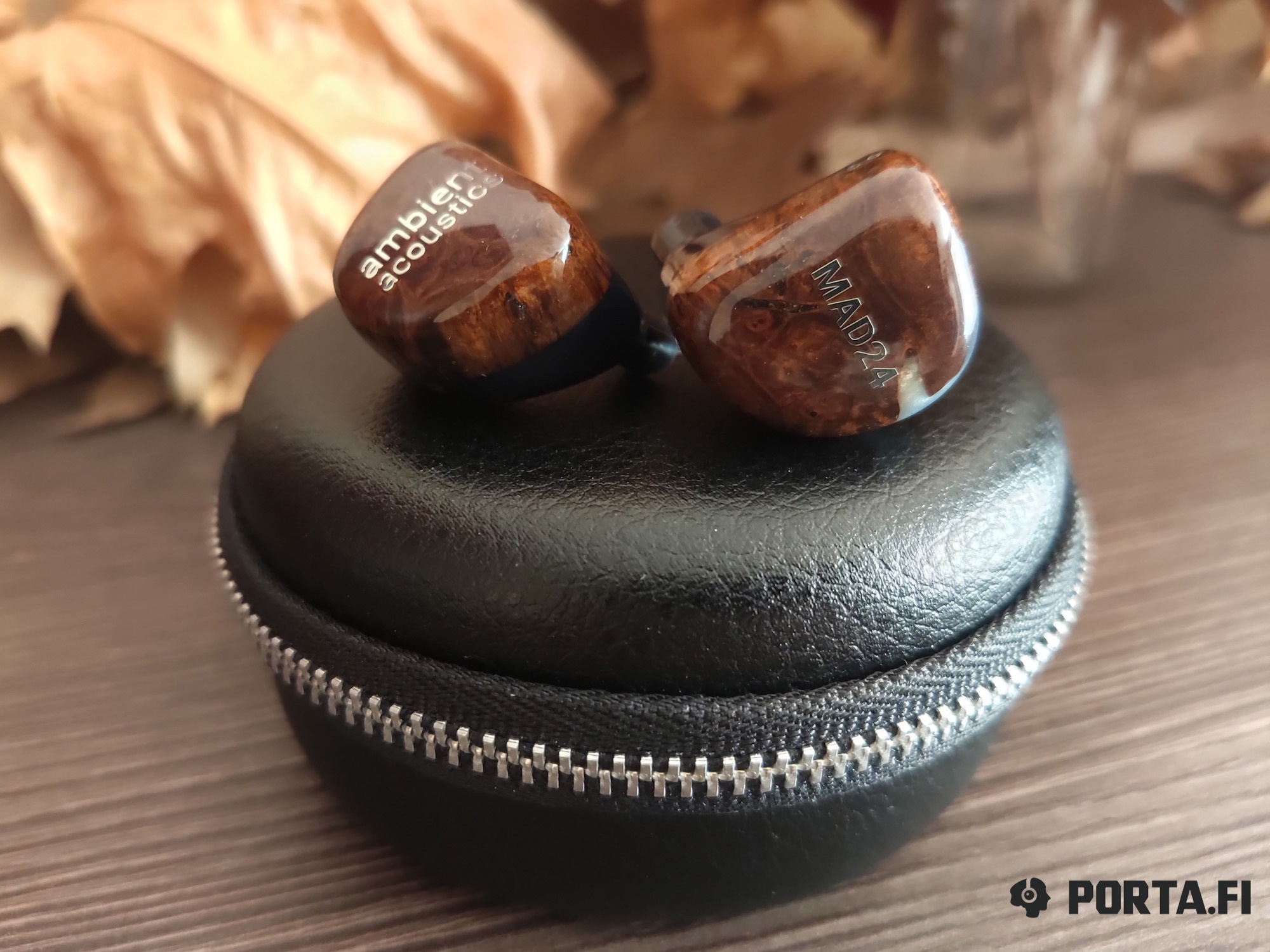 The soundstage of which the manufacturer speaks is really good. It is built with attention to composition, with good separation and interaction of layers and instruments. The latter have enough air between them for being open sounding, but positioning is what really draws attention. It’s not 100% ideal, but very close to that. Of course, MAD24 pay much attention to composition without tending to enforce their own presentation. The width and depth are close to maximum within form-factor.

And of course let’s speak about disadvantages, that are scarce here though. All of them can be fixed with cable rolling. The sound tends to be whole. On the one hand it provides saturation without any gaps and hollowness, but on the other — the size of instruments is overemphasized slightly and I’d like to see even more space between them. Especially it can be said about lows — the IEMs can be perceived as thick and bassy, but in reality there is no extra warmth. The same goes for instrument shape — it’s slightly smoothed but and not convincing. The background could be blacker too, however usually it’s the fault of recording and source, but IEMs add to this as well. The soundstage has it’s boundaries. It’s good in width, but it’s something to note, since you sometimes hear that because of good depth and increased instrument size. I will also underline that those nuances are not very notable but you demand exceptional quality form IEMs of such caliber.

Of course, you would want to listen to quality recording on those, however they are not overly critical. Due to good level of details they separate nuances of recordings from compression artifacts and other things that distract you from enjoying music. Of course the recording problems will be there, but they won’t prevent you from enjoying not so good recordings.

When we are speaking about source matching, it’s necessary to say about rather low impedance — 8.5 Ohm. The sensitivity is 112dB. This translates to enough sensitivity to play from practically everything but not overly so, and they do not collect hiss. So, they are not as sensitive as Campfire Audio, but at the same time not so hard to drive as Dita Dream.

Cable rolling might be your friend here. Apart from that we have great custom IEMs that are technological and very well sounding.

Campfire Audio Atlas review — This is the...

How to clean your earbuds — a detailed...

IMR Acoustics, video about every model (so far)